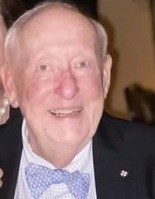 FUNERAL HOME
Baldwin-Fairchild Goldenrod/Winter Park
7520 ALOMA AVE
Winter Park, FL
George Thomas Williamson
WILLIAMSON, George Thomas, a retired investment executive and longtime philanthropist, died on July 14 at his home in Winter Park, Florida at the age of 82. He is survived by his wife of nearly 54 years, Patricia Roy Jamerson Williamson (Patsy); his daughter Mary Tower Williamson McArthur (Polly), her husband Ken, and their children Kenneth Dickson McArthur III (T) and Mary Williamson McArthur (Millie); and his son David Christopher Francisco Williamson, his wife Allison, and their children George Thomas Williamson II (Tom) and Porter Dickson Williamson. He was predeceased by his parents, Everette Monterville Williamson and Madalyn Francisco Williamson.
Born in Pikeville, Kentucky, George spent most of his childhood in Grundy, Virginia before going off to boarding school at The Bullis School in Maryland, from which he graduated in 1958. He spent the next six years attending Virginia Polytechnic Institute, from which he obtained a B.S. in Business Administration in 1962 and an M.S. in Economics in 1964.
Upon completing his master's degree, George moved to Richmond, Virginia, where he began a career in finance and, in 1967, married Patsy. After spending several years in banking, he joined Davenport & Company and became a financial advisor. In 1985, along with three of his friends, George founded the investment firm Financial Corporation of Virginia, where he served as Research Director until selling the firm to A.G. Edwards in 1991. Following George's retirement in 1994, he and Patsy divided their time between Richmond, Palm Beach, and Virginia Beach.
Throughout his adult life, George generously donated his time, talent, and money to countless charitable and philanthropic organizations. Those in which he held leadership positions include The Palm Beach Branch of The English-Speaking Union (President and board member), Historic Richmond Foundation (board member), The Most Venerable Order of the Hospital of Saint John of Jerusalem (Commander), the Virginia Opera (President and member of the Richmond/Central Virginia Board of Governors), Planned Parenthood of South, East and North Florida (board member), Virginia League for Planned Parenthood (board member), and the William Byrd Branch of the Association for the Preservation of Virginia Antiquities (Treasurer and board member). Especially gratifying to George were his many years of service on the boards of trustees of Oldfields School and Eaglebrook School, where he was a Lifetime Trustee.
An extraordinarily outgoing and gregarious person, George belonged to numerous social organizations in Virginia and Florida, including The Commonwealth Club, The Country Club of Virginia, The Richmond German (for which he was a longtime Secretary/Treasurer), The Richmond Hundred, The Society of Virginia Creepers, The Westmoreland Club, The Beach Club (of Palm Beach), The Everglades Club, the Old Guard Society of Palm Beach Golfers, and the Palm Beach Yacht Club.
George was also a longtime member of Saint Stephen's Episcopal Church in Richmond and The Church of Bethesda-by-the-Sea in Palm Beach.
A graveside memorial service will be held beginning at 11am on Friday, August 20 at Hollywood Cemetery in Richmond. A reception at The Commonwealth Club will follow. In lieu of flowers, please consider a gift to Eaglebrook School 100th Anniversary Fund in memory of George T. Williamson, 271 Pine Nook Road, P.O. Box 7, Deerfield, MA 01342.
Published by Palm Beach Daily News from Jul. 16 to Jul. 18, 2021.
To plant trees in memory, please visit the Sympathy Store.
MEMORIAL EVENTS
Aug
20
Graveside service
11:00a.m.
Hollywood Cemetery
Richmond, VA
Funeral services provided by:
Baldwin-Fairchild Goldenrod/Winter Park
MAKE A DONATION
MEMORIES & CONDOLENCES
Sponsored by Baldwin-Fairchild Goldenrod/Winter Park Goldenrod Chapel.
3 Entries
george was a character and our family loved him!!! big hugs to you,dear patsy!!!!!
betsy cottrell euwer(lily)
Friend
July 29, 2021
George will be missed and was deeply loved.
Cousin Ann & family
Family
July 17, 2021
I worked with George at Virginia Opera. He loved people and wanted to help this world to be a better place.
Elspeth ( Beth) McClelland
Friend
July 17, 2021
Showing 1 - 3 of 3 results