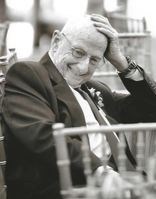 Lowry M. Bell, Jr.
Palm Beach - Lowry M. Bell, Jr., of Palm Beach, FL, New York, and Florence, Italy, passed away peacefully on April 24 at age 91 following a stoic battle of many years against Parkinson's disease. He was born in Birmingham, Alabama June 19, 1929 and was a graduate of Georgia Tech. After WWII, he served as an officer in the US Army supervising reconstruction efforts in Europe as part of the Marshall Plan. He had an exceptional career in architecture and as Vice President of Howard Johnson's with world-wide responsibilities for its locations where he created many innovations. His first marriage ended in divorce. He is survived by his wife of 45 years, Diana. Lowry designed and constructed many homes in Palm Beach. For over ten years, Lowry served as member and at times vice chairman of the Palm Beach Architectural Commission and the Planning & Zoning Commission. Lowry was an experienced golfer and tennis player, having many amateur championships to his credit. They were founding members to the Friends of the Uffizi in Florence, closely involved in sculpture and gallery restorations. The Bells loved to travel and had many personal friendships internationally. They entertained the Queen of Thailand at their Boston residence in 1980. This was reciprocated in Bangkok. They were active in the American Red Cross Ball having hosted many ambassadors and worked closely with the long-serving Ball Chairman, Sue Whitmore. Lowry was a Chevalier of the Confrerie du Tastevin. His formidable knowledge of wine evolved over the years resulting in an enviable wine cellar. In addition to his wife Diana, Lowry is survived by his children Brian Bell and Cynthia Bell Pressel and step-children, Diana Grecco and Christopher Heintz, 6 grandchildren and 4 great grand-children. Contributions may be made to the Friends of the Uffizi or the charity of one's choice. Arrangements will be private.
Published by Palm Beach Daily News from Apr. 29 to May 2, 2021.
To plant trees in memory, please visit the Sympathy Store.
MEMORIAL EVENTS
To offer your sympathy during this difficult time, you can now have memorial trees planted in a National Forest in memory of your loved one.
MAKE A DONATION
Please consider a donation as requested by the family.
MEMORIES & CONDOLENCES
2 Entries
Diana and family, I am so saddened to learn of Lowry's passing. I am fortunate to have known him and spent some great times with you both, in PB and NYC. How wonderful to have had so many years with him. Much love, Sunny
Charles Castor
Friend
June 6, 2021
A long time friend from Miami Senior High School.
Tom Kendrick
Classmate
May 29, 2021
Showing 1 - 2 of 2 results