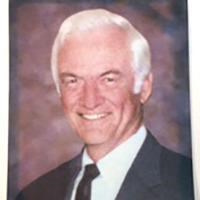 BORN
1922
DIED
2020
FUNERAL HOME
Quattlebaum Funeral, Cremation and Event Center
5411 Okeechobee Blvd
West Palm Beach, FL
April 20, 1922 - December 17, 2020
Dick was born on April 20, 1922 in Saint Paul, Minnesota to Harold and Minnie Harrington the second of four children, two boys (John and Tom) and a girl (Phyllis) all who pre-deceased him. He was also pre-deceased by his daughter-in-law Alane.
He graduated from Harding High School as valedictorian of his class. Dick attended McAlister College in Saint Paul for one year on a scholarship and then one year at the University of Minnesota in the pre-law program. After Pearl Harbor he enlisted in the Navy ROTC where he entered the officers' training school at the University of Michigan for the summer of 1943. The University of Michigan was followed by an assignment to midshipmen school at Columbia University in New York City. He was commissioned an Ensign in 1944 and married Mildred Stewart the same year. Dick remained on duty at Columbia as a staff lieutenant until the fall of 1944 when he was assigned to the Naval Russian language school at the University of Colorado in Boulder until June 1945. He was assigned to the Naval intelligence department in Washington, DC and received his discharge from the Navy in the Spring of 1946.
Dick joined the Milwaukee law firm of Foley & Lardner, eventually being appointed to the Management Committee. He initially practiced Labor Law, transitioning to Corporate Law. Dick was instrumental in the take-overs of two diverse NYSE manufacturing companies with an investor group. The first was a long established and highly regarded builder of Destroyers for the Navy, which was later used as a base to acquire a flooring manufacturer. These were both adverse takeovers prior to the time of regulation of tender offers and the advent of "poison pills." The corporation was eventually sold to management in a leveraged buyout which was the largest one at that time.
In addition to practicing law Dick was an active investor having bought a trucking company and an electric motor manufacturing company, eventually selling both to employees.
Dick was active in the community including positions on the board of the Metropolitan Milwaukee Association of Commerce and Wisconsin Taxpayers Alliance. His charitable activities included serving as chairman of the allocation committee of the Palm Beach United Way for 4 years.
Dick divorced and married Mary Lust in 1975. He retired in 1984 focusing his energies on investments, worldwide travel, and charitable activities.
Dick loved life, his family, golf, and traveling. He is survived by his wife Mary of 45 years, his daughter Janet (John), his son Jeffrey, five grandchildren and six great-grandchildren.
Special thanks to Dick's devoted caregiver Janet Carter for her help.
No funeral is planned.
Memorials may be made to the:
Royal Poinciana Chapel
60 Coconut Road
Palm Beach, FL 33480
OR
Peninsula Music Festival
P.O. BOX 340
Ephraim, WI 54211
Published by Palm Beach Daily News from Dec. 26 to Dec. 27, 2020.
To plant trees in memory, please visit the Sympathy Store.
MEMORIAL EVENTS
To offer your sympathy during this difficult time, you can now have memorial trees planted in a National Forest in memory of your loved one.
Funeral services provided by:
Quattlebaum Funeral, Cremation and Event Center
MAKE A DONATION
MEMORIES & CONDOLENCES
Sponsored by Quattlebaum Funeral, Cremation and Event Center.
1 Entry
Not easy to lose one of the dearest persons this world holds-a spouse. Sympathy. I divorced Plesko, 2012, moved from WI to CO, to be closer to 2 daughters.
JoAnn Peterson Six
December 30, 2020
Showing 1 - 1 of 1 results