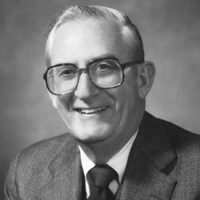 BORN
1923
DIED
2020
FUNERAL HOME
Taylor & Modeen Funeral Home
250 Center Street
Jupiter, FL
Former CFO/EVP of Verizon and Former Chairman of the Board of Jupiter Medical Center
Florida Native, formerly of Gladwyne, PA
April 1, 1923 – February 3, 2020
Ian William Robinson of Juno Beach, FL, formerly of Gladwyne, PA passed peacefully in his home at the Waterford on February 3, 2020. He was 96 years old. Robby as he was known by his friends was born in Miss Mackey's Hospital in West Palm Beach, FL to Thomas and Edith Robinson, who were among the first settlers in Palm Beach County emigrating from England in 1920. As a young man he was a member of the choir at Bethesda-by-the-Sea and was one of the original paper boys for The Palm Beach Post. He graduated from Palm Beach High School in 1940.
Robby was a member of what has been referred to as "the greatest generation" and a veteran of World War II, serving in the U.S. Army Air Corps as Master Sargent. He was deployed to both North Africa and Italy during the war and was awarded the Bronze Star for heroic and meritorious service in a combat zone. He was truly an American hero who stood against the wave of Hitler's Fascism.
After the war Robby enrolled in the Georgia Institute of Technology in Atlanta where he graduated with a Bachelor's of Science Degree in Industrial Management. Following graduation from Georgia Tech, he went to work for Southern Bell Telephone and Telegraph Co.
He had a long and rewarding 36 year career with the Bell System that included: General Accounting Manager Florida Southern Bell, Division Accounting Manager AT&T New York, Vice President Comptroller and CFO Bell of Pennsylvania and Diamond State Telephone Company. While in this role Robby became a friend and confidant of former Mayor of Philadelphia Wilson Goode (Mayor Goode referred to Robby as his "Dutch Uncle"). It was Robby's relationship with Mayor Goode that was instrumental in keeping Bell of Pennsylvania's headquarters in the City of Philadelphia rather than moving it out of the city as the company had planned.
As he took on his final role, before retirement, as Chief Financial Officer and Executive Vice President of Bell Atlantic (Verizon), Robby was key in representing the interests of all the Bell Operating Companies during their divestiture from AT&T, including helping to develop and then testifying on the plan for stock distribution, before the Congressional Committee established to oversee the process.
In 1985 He retired and returned to his native Florida. He and his beloved wife of 61 years, Betty King Robinson, enjoyed almost 30 years of wonderful retirement together in South Florida prior to her passing in 2012. Even in retirement, with Betty by his side, Robby continued to maintain many of his business affiliations as well as taking on a few more. He was a member of the Federal Home Loan Bank Board, Third District; Board of Director for Insurance Company of North America Mutual Funds (CIGNA), Board of Director AIM Mutual Funds, Chairman of the Board of the Jupiter Medical Center and President of the Tequesta Country Club.
Robby was preceded in death by his parents: Thomas and Edith Robinson; brother: Colin Robinson, son: Dr. John William Muth; and his beloved wife of 61 years: Betty King Robinson. He is survived by his sister Marjorie Beall of West Palm Beach, FL; one daughter Susan Robinson of Palm Beach Gardens, FL, three sons: Ronald Emerich (Dianne) of Hiawasee, GA, Thomas Robinson (Denise) of Pawley's Island, SC and Stephen Robinson (Priscilla) of Huntsville, AL; six grandchildren, six great-grandchildren, one great-great-granddaughter, along with two nephews, Colin Beall and David Norris; and their families.
The family will receive friends from 4:00PM – 7:00PM Friday, February 7 at Taylor & Modeen Funeral Home, 250 Center St, Jupiter, FL 33458. A Celebration of Life Service will be held 1:00PM Saturday, February 8 at Taylor & Modeen Funeral Home. Interment with military honors will immediately follow at Riverside Memorial Park, 19351 SE County Line Rd, Tequesta, FL. A reception immediately following interment will be held at Susan Robinson's house.