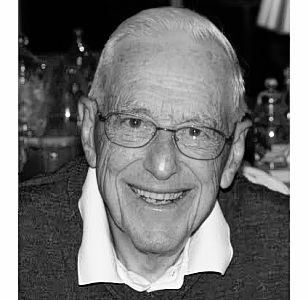 John Benn, age 93, World Class Tennis player, passed away peacefully on January 12, 2014, with his wife, Helen (nee Hovland) by his side. Born in Birmingham, England, John emigrated with his mother Beatrice and older brother Alec to Toronto, Canada to join their father Theo. Later the family with new sister Edith moved to New York City. As a boy John excelled at ice hockey, golf, and tennis. A graduate of Brown University, he majored in Civil Engineering, was a member of the Phi Kappa Psi fraternity, competed on the Swimming and Diving Team as well as the Tennis Team; playing number 1 Singles, and serving as Captain his Junior and Senior year. He served his country in the Army from 1944 to 1946 principally in Paris, France working as a topographic draftsman. Despite living in a tent during the war he was somehow able to fit in occasional tennis matches at Roland Garros. John worked for Turner Construction Co. for 45 years, supervising the construction of skyscrapers, hospitals, and manufacturing plants throughout the northeast including New York City, Chicago, Louisville, and lastly in Philadelphia as Chief Purchasing Agent. After retirement he was a consultant for Turner on the completion of the A.I. DuPont Hospital in Wilmington, Delaware. John devoted much of his adult life to the sport of tennis and competed until the age of 90 travelling nationally and internationally. He competed in many U.S. Tennis Association National Championships winning 7 Gold Balls (first place), 9 Silver Balls, and 6 Bronze Balls. In 2001 he represented the United States in the International Tennis Federation World Championships in Australia and won the Doubles Title in the Super Senior division. He spent the past 24 years in south Florida, playing tennis almost every day until the age of 91. He was a devoted and loving husband, father, grandfather and great grandfather. He is survived by his wife of 71 years, Helen, their children; John Benn, Jr. (Kathy), Peggy Morphesis (Don), Betsy Woodrow (Gordon), Deborah Benn, and Lisa Costigan (Joe). He will also be missed by his grandchildren: Kristel, Michael, Kimberly, Christopher, Nicole, Berry, and Lacey and also his great grandchildren: Kalani, Kai, Kristyn, Chase, Carter, Addison, Carson, Eva and Mia; as well as many relatives in England, here in the states and many friends around the world. A memorial service will be held at 2:00 PM on Sunday January 26 in the auditorium at St. Andrews Estates North where John and Helen lived and made many friends for 13 years, 6152 N. Verde Trail, Boca Raton

To express condolences and/or make donations: Visit PalmBeachPost.com/obituaries
To plant trees in memory, please visit our Sympathy Store.
Published by The Palm Beach Post from Jan. 23 to Jan. 24, 2014.
MEMORIAL EVENTS
No memorial events are currently scheduled.
To offer your sympathy during this difficult time, you can now have memorial trees planted in a National Forest in memory of your loved one.
MAKE A DONATION
MEMORIES & CONDOLENCES
5 Entries
John and I worked together at Turner Construction in Philadelphia. He was a friend and a gentleman. My condolences go out to family. Rest in peace John.
Russell Wilcox
February 18, 2014
John was the first tennis player inducted into The Media Area Sports Hall of Fame and will be remembered at our Nov 5th Banquet. One of the finest gentleman to ever compete and despite beating you, John always made you feel good! My sympathies to the Benn Family.
Phil Damiani
January 28, 2014
To the Benn family: We just learned of John's passing and want to express our most sincere sympathies. John was a great friend and tennis partner, and we enjoyed many good times together. Her will be greatly missed.
Beverly & Newt Meade
January 26, 2014
With deepest sympathy to the Benn Family.

May the Hearer of Prayer (Psalm 83:18, Psalm 65:2) grant you strength, courage and the sweetest peace during your time of sorrow. And may you always cherish the many wonderful and precious memories of times spent with John.

Juanita, Jacksonville, Fla.
January 25, 2014
Our thoughts and prayers are with you and your family. Your Father was an amazing person. Love