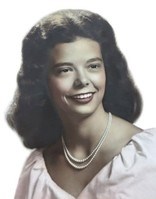 Mary "Claire" (Robida) Parks
Mary "Claire" (Robida) Parks passed away peacefully in the early morning of Saturday, August 7, 2021 at the age of 93 to be with the Lord and reunited with her beloved daughter Mary Lynn (Parks) Grant.
Claire was born November 15, 1927 in Jacksonville to Anthony and Alberta (Majewski) Robida. A proud member of The Pioneer Club, her grandparents Frank and Louise Majewski, owned West Palm Beach's first bakery, "Majewski Bakery" which catered for Henry Flagler and his hotels The Royal Poinciana and The Breakers.
Less than a year after she was born her family returned to West Palm surviving the Great Hurricane of 28. Henceforth baby Claire was known as Mary Claire to honor the Virgin Mary by her mother "Mimi", who was convinced had spared her daughter from certain death.
Claire graduated from Palm Beach High School followed by Ward-Belmont Finishing School in Nashville, Tenn. In 1947 she enrolled in the University of Florida as part of the first class to accept female students earning a Bachelor's degree in Education. In college she met what became many life-long friends including her Kappa Alpha Theta sisters and future husband Richard "Dickey" Parks.
Together they moved to the south end of West Palm Beach along with most of her friends, raised two children, Richard "Ricky" and Mary Lynn, and taught at South Olive Elementary School for 30 years. In addition to teaching, Claire was a member of the Junior League, the aforementioned Pioneer Club, and volunteered at the Church Mouse and the First Baptist Book Store. She also enjoyed being a candy striper at Good Samaritan Hospital.
Claire's favorite time of year was summer when "school let out." She would count the days until The Breakers' summer season where she could be found everyday enjoying the sun with her friends until sadly the new school year began. Her other favorite pastimes were reading, watching FSU football games (despite graduating from UoF-Gainesville, she was a lifelong fan of Bobby Bowden who ironically passed away within 24 hours of Claire) and playing bridge with friends: Rose Walton, Lois Burns, Pat Johnson, Nancie Clark, Claire Russell, Libby Nugent, Alice Edge, Rainey Brainard, and Mary Ifft.
She is preceded in death by her parents, beloved brother Anthony "Tony" Robida, and her daughter Mary Lynn. She is survived by her loving son Richard Anthony Parks, nephew Randy Robida, cousin Mark Beatty, and son-in-law Burke Grant.
Mary Claire was a genteel Southern lady with an easy laugh and a wealth of friends who will be greatly missed by all who knew her. Among the many pearls of wisdom she passed onto her friends and children was one that summed up her philosophy of life best, "You only need two things in life to be happy…..your health and your friends." Almost up until the very end, Mary Claire was blessed with both in abundance.
Published by The Palm Beach Post from Aug. 21 to Aug. 22, 2021.
To plant trees in memory, please visit the Sympathy Store.
MEMORIAL EVENTS
To offer your sympathy during this difficult time, you can now have memorial trees planted in a National Forest in memory of your loved one.
MAKE A DONATION
MEMORIES & CONDOLENCES
0 Entries
Be the first to post a memory or condolences.