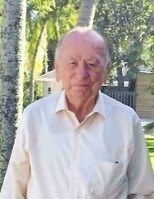 FUNERAL HOME
Taylor & Modeen Funeral Home
250 Center Street
Jupiter, FL
Ralph M. Crews
Ralph Crews, our beloved husband, father, grandfather, and great grandfather, took his final journey to his heavenly home on Wednesday, August 18, 2021 to be forever with his beloved Lord and Savior, Jesus Christ. He was surrounded by his loving family, his wife Sibyl, son Mark (Paula), daughter Suzanne Wilkinson (Gib), and five beloved grandchildren; Erica Crews Bowley (Jay), Kara Wilkinson Rice (Tony), Rachel Crews, Nicholas Wilkinson and Gib, Jr. (Leeann). Ralph was blessed with five great grandchildren; Kaitlyn Rice, Ethan Cranmer, Dylan Rice, Lukas Cranmer, and Harper Bowley. His parents and five siblings have gone on before him and on this blessed day there will be a sweet heavenly reunion. Ralph was born in Vidalia, GA to George and Frances Crews on October 9, 1931. The family moved to Pahokee, FL in 1940. He grew up in a grocery store, from the country store his Dad had on the farm in Georgia to the Thriftway of Pahokee. Ralph graduated from Pahokee High School in 1950 and the University of Florida in 1954 and earned a Bachelor's degree in Business Administration along with Banking and Finance. After his sophomore year he married the love of his life, Sibyl Jensen. They would have celebrated their sixty-ninth anniversary on September 7, 2021. After college Ralph served in Japan with the United States Army for two years. When he returned to Pahokee he was greeted by his loving wife and his 16 month old son, Mark. Ralph went into business with his father at Crews Super Market. Ralph was known as a great business man, with a reputation for being gracious, honest and benevolent. He and his family were faithful members of Pahokee's First Baptist Church where he served as deacon and numerous other positions. After retiring he and Sibyl enjoyed numerous trips around the United States enjoying the handiwork of God's creation. When they moved to Jupiter they became active members of Tequesta First Baptist Church. A Memorial Service will be held at Tequesta First Baptist Church, 423 Tequesta Dr. on August 25th at 10:30AM. A Visitation will begin at 10AM. Ralph will be laid to rest in the Port Mayaca Cemetery near two of his siblings and his parents. In lieu of flowers, the family requests that donations in his memory be made to Tequesta's First Baptist Church or Trusbridge of Palm Beach County. For online condolences visit www.taylorandmodeen.com
Published by The Palm Beach Post from Aug. 21 to Aug. 22, 2021.
MEMORIAL EVENTS
Aug
25
Visitation
10:00a.m.
First Baptist Church of Tequesta
423 Tequesta Drive, Tequesta, FL
Aug
25
Funeral service
10:30a.m.
First Baptist Church of Tequesta
423 Tequesta Drive, Tequesta, FL
Funeral services provided by:
Taylor & Modeen Funeral Home
MAKE A DONATION
MEMORIES & CONDOLENCES
Sponsored by Taylor & Modeen Funeral Home.
0 Entries
Be the first to post a memory or condolences.