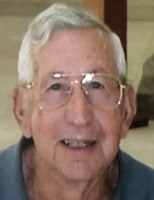 BORN
1928
DIED
2021
Richard Marvin Watson
Boynton Beach - Richard Marvin Watson of Boynton Beach, FL passed away on August 13, 2021 following a brief illness.
Richard was born in Hapeville, Georgia on the 9th of July in the year 1928.
He grew up in Lake Worth, FL, with his grandparents W.T. and Jesse Meason. He graduated from Lake Worth Highschool in 1946, where he lettered in baseball, basketball and football. He served in the US Army, 8th Calvary Regiment from June 1946 to October 1947. He was stationed in Sendai, Japan. He married Betty (King) in 1950 and together they had two daughters.
He was a skilled carpenter and construction foreman for over 40 years. Over the years he built many small banks, schools and restaurants in Palm Beach County, as well as, homes for his family.
He loved fishing; we treasure his stories of snook fishing as a young man, chasing the blue fish runs from one inlet to the next each fall, his descriptions of Lake Worth lagoon when it was the colors of the ocean; Of riding his bike to the Hillsborough inlet where his grandfather was a bridge tinder.
Always a lover of baseball, his team was the Atlanta Braves. He had an astounding memory for the Braves stats and players over the years. With his son-in-law Joshua he got to see the Braves play in many of the iconic stadiums of the Northeast.
He was preceded in death by: his wife Betty(2010), his son-in-law Joshua Kelsey(2020). He is survived in life by: his daughters Susan Koglin, Sandra Kelsey. His granddaughter Cristina Sabin. His special friends Sandy, Jeff. We will miss him greatly.
His wish was to have his cremains scattered in the ocean the he loved. The service will be on August 27th.
Published by The Palm Beach Post from Aug. 21 to Aug. 22, 2021.
To plant trees in memory, please visit the Sympathy Store.
MEMORIAL EVENTS
Aug
27
Service
FL
MAKE A DONATION
MEMORIES & CONDOLENCES
0 Entries
Be the first to post a memory or condolences.