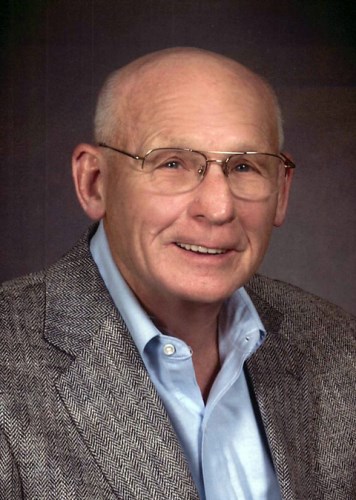 Edward Scott Fowler, a life-long resident of McLean county died on October 24, 2020, at 86, from Alzheimer's. Ed, one of eight children of Ernest and Nina Fowler, was born December 31, 1933.

Ed graduated from Normal Community High School in 1952 where he was a member of FFA. After serving our country at the end of the Korean War, he was hired by the Ralston Purina Soybean Processing Plant in Bloomington in 1956. In 1981 he was promoted to Production Manager. He retired from the plant, now owned by Cargill in 1999.

On May 4, 1957, Ed married Jeralyn Orr, now deceased, at Second Presbyterian Church, where he enjoyed serving as an Elder, Deacon, Sunday School teacher, Youth leader, and Camp Counselor. After his retirement he served as Executive Director of Western Avenue Community Center for two years. His Christian faith was the guiding light for his life.

Ed was a man of integrity who believed in hard work and treating everyone with respect and kindness. As a lifelong Cubs fan he was thrilled to see them finally win the World Series in 2016.

Ed was loved by everyone and will be missed by many, including his children Rori Howard (Rus) and Scott Fowler (Stephanie). Ed brought joy and happiness to his four grandchildren: Jeffrey Howard (Katie), Matthew Howard (Beth), Annalia Fowler, and Cameron Fowler. Ed enjoyed his great-grandchildren: Nora, Liam, Ezra, and Gavin. He is also survived by three siblings: Paul Fowler, Shirley Denniston, and Bessie Fowler. In addition to his wife and parents, Ed was predeceased by four siblings: William Fowler, Merlin Fowler, Betty Fowler, and Eileen Runion.

To plant trees in memory, please visit our Sympathy Store.
Published by The Pantagraph on Nov. 1, 2020.
MEMORIAL EVENTS
No memorial events are currently scheduled.
To offer your sympathy during this difficult time, you can now have memorial trees planted in a National Forest in memory of your loved one.
Funeral services provided by:
Calvert & Metzler Memorial Home Bloomington Chapel
GUEST BOOK
3 Entries
Sorry for your loss. Our thoughts and prayers are with the family. I remember playing together as kids and riding the horse when visiting uncle Ernest & aunt Nina.
Larry & Grace Fowler Peoria, IL
November 2, 2020
I´m so sorry to hear of Ed´s passing. My deepest sympathy, Rori and Scott. I remember your Dad as a kind, gentle, honest and caring person. His Christian faith was an example for all. Prayers for you and your families.
Laurie Black
November 1, 2020
My deepest sympathy to your family. I waited on your mom and dad at the creditor union and always enjoyed taking care of them. You are in my thoughts and prayers!
Julie Charter
November 1, 2020