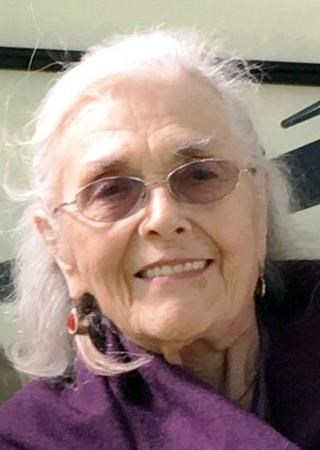 Barbara was born February 15, 1930 to Frank and Amelia Kipfer of Pontiac. She attended Blackburn College. She married Martin McClellan and travelled the world while Marty was in the Air Force. She moved to Illinois during his tour of Vietnam. She married Robert Brandt in 1971. Barbara worked at Illinois State University for the majority of her career.

After her retirement from the Illinois State University library, she continued to work as a clerk for Jewel-Osco until her 90th birthday. Her joys were her family, her work, and her cats. She was a woman whose ears would always listen, had arms that would always hold you, whose love was unconditional, and her heart was pure as gold.

Services will be held on Sunday, April 11, 2021 at Calvert-Metzler Memorial Home at 115 East Washington Street in Bloomington, IL at 1:00 p.m. Masks are required at the memorial service.

If you would like to send flowers, please do so, but donations to the World Wildlife Fund would also be a beautiful sentiment.

To plant trees in memory, please visit our Sympathy Store.
Published by The Pantagraph on Apr. 8, 2021.
MEMORIAL EVENTS
Apr
11
Service
1:00p.m.
Calvert & Metzler Memorial Home Bloomington Chapel
1115 East Washington Street, Bloomington, IL 61701
Funeral services provided by:
Calvert & Metzler Memorial Home Bloomington Chapel
MAKE A DONATION
MEMORIES & CONDOLENCES
Sponsored by Calvert & Metzler Memorial Home Bloomington Chapel.
1 Entry
My thoughts are with you all today and always. Barbara was such a lovely, bright, vibrant woman. I have great memories of my time at Chicksands. The lively "discussions" at dinner, the fun we had at The Sands Players rehearsals. I got to see how another family lives, close up. I will never forget the generosity your family gave. I know she will be missed, but you may have comfort in her long, mostly healthy life!
Pam Tallent
April 11, 2021