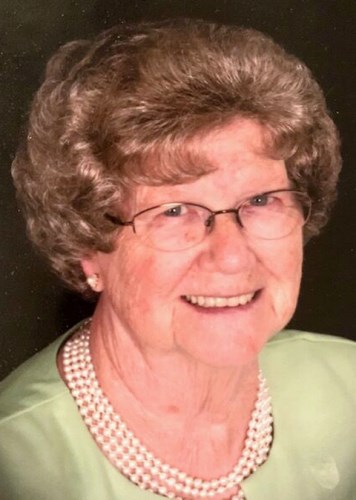 SAN ANTONIO, Texas - Darlene Landstrom, 90, of San Antonio, TX, died on Saturday, August 14, 2021, at her residence with her family by her side.

There will be a memorial service for Darlene from 1:00-2:30 p.m. on Saturday, September 25, 2021 at Calvary Baptist Church in Normal, with visitation starting at 1 p.m. Arrangements are being handled by Calvary Baptist Church and the family. Memorial contributions may be made to Mennonite College of Nursing at ISU.

Darlene was born on Aug. 8, 1931, in Peoria, to Charles and Ellen (Parsons) Gregory. She married Lawrence W. Landstrom on Oct. 11, 1953, in Bloomington. They were married 62 years before he passed away in 2015. She was also preceded in death by her parents; one sister, Charlotte Robertson; and two of her 19 great-grandchildren, who were called to be with the Lord earlier than expected.

She is survived by her daughter, Pamela Gregory of San Antonio, TX; and her son, Greg (Adella) Landstrom of St. Petersburg, FL; 11 grandchildren, their spouses; and 17 great-grandchildren. Darlene was looking forward to being a great-great grandmother to a sweet baby girl, who was born on September 3, 2021. She is also survived by one brother, Ronald Gregory; and one sister Barbara (William) Johnson, all from Bloomington-Normal. Darlene was one of four children and Lawrence was one of eight children, so there are in-laws, nieces and nephews that are not mentioned, who also will be sharing in the family's mourning.

A graduate from Mennonite Hospital's School of Nursing in 1953, Darlene continued her career as a nurse for more than 35 years. She enjoyed participating in church handbell choirs, crocheting and many other things; however, being a mother and grandmother brought her the most joy, for which she will be always remembered.

Published by The Pantagraph on Sep. 19, 2021.
To plant trees in memory, please visit the Sympathy Store.
MEMORIAL EVENTS
Sep
25
Visitation
1:00p.m.
Calvary Baptist Church
Normal, IL
Sep
25
Memorial service
1:00p.m. - 2:30p.m.
Calvary Baptist Church
Normal, IL
MAKE A DONATION
MEMORIES & CONDOLENCES
2 Entries
Hi Pam and Greg! So sorry to read about your momma. I was glad to read she was close to Pam in San Antonio. I ran across her name in a Normal quilt shop back in 2015 or 2016, about the time my mom was in the hospital and then she passed in 2016. She had made a quilt that won an award. The quilt shop wouldn't give out her contact info--understandable but I was sorry I couldn't at least give her a call. Adeline is in the Luther Oaks Assisted Living and Nursing Home and Dana was just up there to see her last week. Again, I was so sorry to read about your loss. Neat she was a great grandmother and almost a great-great grandmother! Love to you both and your families, Carla
Carla Slayback Rogers
Other
October 2, 2021
Pam, Greg amd family. I am ao sorry I couldn't be at the visitation. She was a good friend and co-worker. May the love of friends and family carry you through your grief.
Joyce Patten
Friend
September 25, 2021
Showing 1 - 2 of 2 results