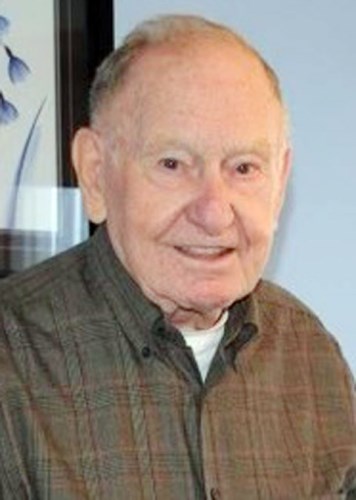 LAWNDALE - Ernest W. "Dick" Purlee, 96, of Lawndale, passed away on Monday, May 3, 2021, at The Christian Village Nursing Home in Lincoln. He was the oldest living resident of Lawndale.

Funeral services for Ernie will be on Friday, May 7, 2021, at 11:00 a.m. at the Jefferson Street Christian Church with Mr. Ryan Edgecombe officiating.

Visitation will be held from 10:00 a.m. until time of the service.

Burial will be in the Lawndale Union Cemetery in rural Lawndale. Military Rites will be conducted by American Legion Post #263 of Lincoln.

Mr. Purlee served in the United States Army during WWII. He retired from Lehn & Fink Company in Lincoln in 1990.

His hobbies included fishing, hunting, boating, trapping and building houses with his family. He served on the committee to install street lights in Lawndale. And he loved watching all of his grandchildren play sports.

Memorials may be made to the St. Jude Children's Research Hospital or American Cancer Society.

Peasley Funeral Home is in charge of arrangements.