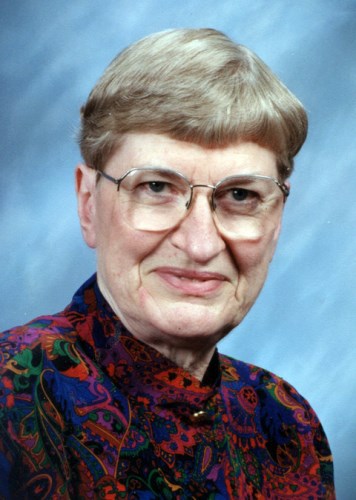 Evelyn's remains will be interned at Ropp Cemetery and a memorial service will be planned in the future. Memorial gifts may be made to Mennonite Central Committee and Bethel College (KS), in care of Kibler-Brady-Ruestman Memorial Home in Bloomington.

Evelyn was born on July 26, 1936, in Newton, KS to Walter and Agnes (Schmidt) Dyck. She grew up in South Central Kansas and in Beatrice, NE, where her father served as a pastor. Agnes died when Evelyn was 13 and Walter's marriage to Martha Suderman created a new blended family. In 1954, after graduating from Berean Academy in Elbing, KS, she enrolled at Bethel College in North Newton, KS majoring in Chemistry. In the summer of 1955 she volunteered as a healthy test subject at the National Institutes of Health, Bethesda, MD. Evelyn graduated on the morning of May 26, 1958, and was married that evening, in a wedding dress she had made, to her classmate, John Bertsche.

The couple moved to Chicago, where John began medical school. Evelyn supported the family working in sales until the birth of Cynthia in 1959 and Daniel in 1961. On completion of John's medical training the family served from 1964-1966 with Mennonite Central Committee in Grande Rivière du Nord, Haiti. There, Evelyn homeschooled the children and worked with local artisans to produce crafts for sale in MCC Self Help stores.

Following three years in Evanston, IL, where John completed his medical residency, the family moved to Normal, IL. During this time Evelyn was a homemaker and volunteered with church and community organizations. Evelyn and John were active longtime members of the Mennonite Church of Normal.

In the 1980s Evelyn pursued her interest in pastoral ministry and spiritual direction by furthering her education at Associated Mennonite Biblical Seminary, Elkhart, IN, and the Shalem Institute for Spiritual Formation, Washington, DC. She served as associate pastor at the Mennonite Church of Normal for 14 years. She also served on the board of directors of Bethel College and was active in church conference leadership. In 1996, she retired and helped care for her aging parents.

Evelyn enjoyed gardening and cooking, was an avid reader, and participated in weekly book study groups. She and John served as host family for nearly 40 international students, mostly from ISU.

Online condolences and memories of Evelyn may be left for her family at kiblerbradyruestman.com.

To plant trees in memory, please visit our Sympathy Store.
Published by The Pantagraph on Oct. 24, 2020.
MEMORIAL EVENTS
No memorial events are currently scheduled.
To offer your sympathy during this difficult time, you can now have memorial trees planted in a National Forest in memory of your loved one.
Funeral services provided by:
Kibler-Brady-Ruestman Memorial Home
MEMORIES & CONDOLENCES
Sponsored by Kibler-Brady-Ruestman Memorial Home.
0 Entries
Be the first to post a memory or condolences.