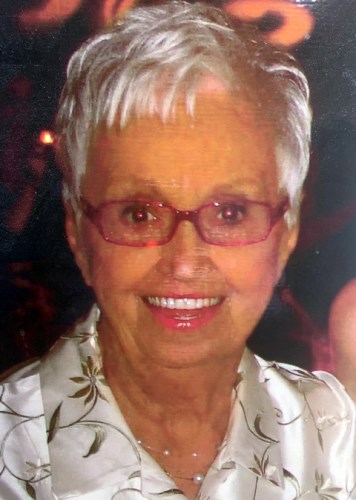 A private graveside service will be held at Funks Grove Cemetery, McLean. Cremation rites have been accorded by Carmody- Flynn Funeral Home, Bloomington.

In lieu of flowers, memorials may be made to St. Mary's Catholic Church or School, Bloomington. To express condolences online, please visit www.carmodyflynn.com.

Janet Marie Glomp was born June 30, 1925 in Peoria, to Francis and Eleanor (Siberman) Glomp. She married Cleo Calvin Yontz on March 16, 1946 in Little Rock, AR and they went on to raise their three children, Cindy, Mark and Barry on their farm in Armington, IL where family loved to gather. Summers were spent visiting Eagle River, Wisconsin - one of Janet's favorite vacation spots.

She was preceded in death by her brother, Richard Glomp and her sister, Margaret "Peggy" Glomp. Her husband Cleo preceded her in death on September 27, 2001 and she has missed him every day since.

Janet was a 1943 graduate of Delavan High School. She first worked as an engineering draftsman at Caterpillar Tractor Co. in Peoria before becoming a mother. She also worked for Country Companies in Bloomington after moving to the farm in Armington. She and Cleo additionally worked part-time as realtors in Bloomington. After moving to Bloomington with Cleo in November of 1991, Janet enjoyed a long career as a realtor for Armstrong Realty, Bielfeldt Realty and Construction and later for Prudential Snyder Realty. She helped launch her daughter Cindy's career and Cindy is forever grateful to have "learned from the best." Janet and Cindy enjoyed being a real estate team together in Bloomington.

Janet loved gardening and attracting birds to her back yard. She enjoyed cross stitch, playing the organ and painting. In her later years she loved watching football, Fox News and her Chicago Cubs.

Janet loved spending her free time with her family, especially her grandchildren. She loved to sit back and watch her family enjoy a large gathering or party where there were always a lot of laughs. She loved that her sons are good friends and the joking that inevitably ensues between them when they are together. She also adored her dear four-legged companion; her Border-Collie/Spaniel mix, Bean.

Janet was the matriarch of our family and one of the strongest women we could ever hope to know. She was a proud breast cancer survivor and would often joke that "getting old ain't for sissys" while she faced health and mobility struggles in her later years with both grit and grace. She was fiercely protective of her family, incredibly witty and loved to laugh. She is so very loved and dearly missed.

Published by The Pantagraph on Oct. 30, 2020.
To plant trees in memory, please visit the Sympathy Store.
MEMORIAL EVENTS
To offer your sympathy during this difficult time, you can now have memorial trees planted in a National Forest in memory of your loved one.
Funeral services provided by:
Carmody-Flynn Funeral Home
MAKE A DONATION
MEMORIES & CONDOLENCES
Sponsored by Carmody-Flynn Funeral Home.
9 Entries
Sorry to hear of Janets passing. I loved to visit with her when I worked for her doing her window treatments. We shared a love for Eagle River, Ws. She was always smiling and upbeat, strong! Our Best to the family, Tim and Sue
Sue Mikel
November 8, 2020
Janet was a great woman, always had a smile! I have fond memories of her as a fellow realtor.
Kim Filkin
November 5, 2020
So sorry to learn of Janet's passing. She was an exceptional lady and I truly loved. She was always good to me especially in my youth. Remember me going to Eagle River with your family? Prayers to all of you kids and your families.
Barbara Johnson
November 4, 2020
Dr. Yontz, So sorry for your family´s loss. Tara (from BDL)
Tara
November 3, 2020
My thoughts and prayers go out to the Yontz family in this time of loss. Her gift to this world is her family she leaves behind. May you find comfort in all the fond memories you have of her and the blessings God has bestowed on you because of her.
Gary Swango
November 2, 2020
Mark and Family, I´m so sorry to hear of the loss of your precious mom. Sounds like she was well loved and will be sorely mussed. With sympathy, Sandi Ritchie
Sandi Ritchie
October 30, 2020
Janet was always upbeat and happy. She will be greatly missed.
Pat Burr
October 30, 2020
I´m so sorry for your loss. What a beautiful obituary for a life well lived and much loved. May God comfort you all today and for the days ahead.
Kaye Freitag Gwin
October 30, 2020
So sorry to hear of Janet´s passing. She was a wonderful woman!
Sarah Oberst
October 30, 2020
Showing 1 - 9 of 9 results