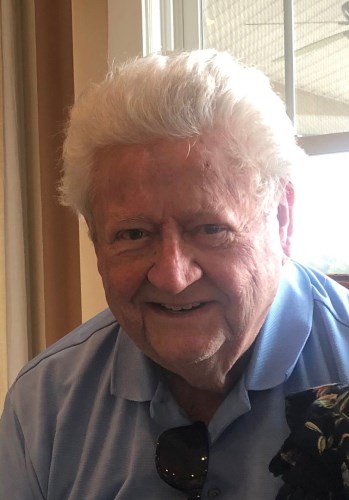 Family and friends will share memories at 1:00 PM Tuesday, October 13, 2020 at Funks Grove Cemetery, McLean, IL. Visitation will be 11:00 AM-12 Noon Tuesday, October 13, 2020 at Calvert & Metzler Memorial Home, Bloomington, IL The visitation and service will be limited to 50 persons and it is requested for everyone to wear a mask. The family suggests memorials be made to Chef John Endowed Scholarship for Dietetics, Western Illinois University and the Winifred G. Lawrence Endowed Memorial Scholarship for Nursing at Mennonite College of Nursing, Illinois State University. Arrangements are being handled by Calvert & Metzler Memorial Home, Bloomington, IL.

John was born May 24, 1932 in Rockford, IL the son of Robert A. and Olive Safford Lawrence.

Surviving are his sister Ruth Ives, son Robert F. (Ellen) Lawrence, their children, Christopher, Bobby, Katy and Tom, his daughter, Jane (David) Beveridge and their daughters, Wendy and Gail, and son, Bill (Jan) Lawrence, and their children, John, Kate and Kristen. There are 13 great-grandchildren.

John is preceded in death by his parents and sisters, Mary and Roberta.

John was educated in the Rockford Schools, graduating from West High in 1950. He received a BA degree from Knox College in 1954 with a commission as a 2nd Lieutenant, Infantry US Army. While at Knox, John met Winifred Gillen of Virginia, IL and they were married in historic Old Main at Knox College in September of 1954.

After training at Ft. Benning, John was stationed in Germany with the 9th Infantry Division, Army of Occupation. He and Winifred went on to serve with the 1st, 8th and 10th Infantry Divisions in command staff and communications assignments. During this duty, they become parents of Bob (Springfield, IL), Jane (Augsburg Germany) and Bill (Ft. Riley Kansas).

After leaving service in 1962, John became associated with the Admissions Office of MacMurray College, Jacksonville, IL. Later he returned to Knox College, and for 12 years was Associate Director of Admissions there with responsibilities in New York and along the eastern seaboard. He then became assistant to the Dean of a medical division of New York University and later went into private business as a business forms designer. After 20 years in business he and Winifred, a teacher in special education, retired to Colchester, IL where they became frequent visitors at Damones Restaurant, owned at that time by Bill and Jan Lawrence.

Based upon a history of culinary education in NYC, he was appointed as an instructor in the Department of Dietetics at Western Illinois University. In addition, he had great fun with non-credit courses in which he and many local cooks taught each other, a practice he continued for several years.

Please view the obituary and share your condolences and memories online at www.calvertmemorial.com.

Published by The Pantagraph on Oct. 11, 2020.
To plant trees in memory, please visit the Sympathy Store.
MEMORIAL EVENTS
Oct
13
Visitation
11:00a.m. - 12:00p.m.
Calvert & Metzler Memorial Home Bloomington Chapel
1115 East Washington Street, Bloomington, IL
Oct
13
Memorial Gathering
1:00p.m.
Funks Grove Cemetery
McLean, IL
Funeral services provided by:
Calvert & Metzler Memorial Home Bloomington Chapel
MAKE A DONATION
MEMORIES & CONDOLENCES
Sponsored by Calvert & Metzler Memorial Home Bloomington Chapel.
2 Entries
My prayers of solace and comfort to Jan and Bill and all loved ones. Mr. John Lawrence was a good friend with whom we spent time together and even travelled to Chicago by train. I will miss his friendship and generosity towards so many institutions. May his soul Rest In Peace. Pastor Rev. Dr. Anet Satvedi ( Father of Dr. Veronica Marrochello)
Rev. Dr. Anet Satvedi
October 12, 2020
Bill & Jan, I was so sorry to learn of John's passing. I always found John to genuinely be concerned about making the world a better place. He was a good friend of MCN but his presence will always be felt. I am thinking of both of you and your family. My prayers are with all of you. Warmly, H. Catherine Miller
H. Catherine Miller
October 11, 2020
Showing 1 - 2 of 2 results