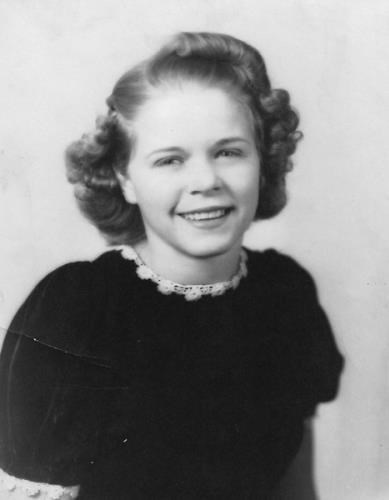 BORN
1920
DIED
2018
BETTY B. HAZLETT (1920-2018) Betty B. Hazlett was born on March 20, 1920 in Sedan, Kansas to John F. Blum and Ruby L. Blum. Betty had an older brother, Phil F. Blum of Reno, Nevada (1917-2009), and an older sister, Lenis Letha Blum Hall of Overland Park, Kansas (1920-1991), who each predeceased her. Betty spent much of her childhood in Kansas City, Missouri and graduated from East HIgh School there in 1938. She was a lively, attractive and popular student with strong interests in poetry, dance and music. She attended teacher's college for several years but had an interest in flying. When her dreams to be a pilot were not realized, she became a flight attendant for Braniff Airlines. During WWII she moved to San Diego, where she met a Navy pilot, William R. Hazlett, recuperating from malaria he caught during the struggle for Guadalcanal. In 1946 Bill and Betty married and led an adventurous life together. Bill, a decorated wartime hero, stayed in the Navy and became a test pilot doing two tours of duty as a leader at the Patuxent River training facility in Maryland, as well service at the Pentagon, Hawaii, Florida, Virginia, California, New Zealand (as US Defense attach‚), deployments on carriers and elsewhere. Betty served as a diplomatic host in New Zealand and earlier in counseling young spouses of sailors (and in some tragic cases their widows). After retirement in Northern Virginia Bill and Betty in 1989 moved to Paradise, CA to be closer to children and grandchildren in California and Hawaii. In Paradise they were active in the Reserve Officers Association. In 2009 Bill died just before his 90th birthday. Betty later moved to an assisted living facility in Palo Alto where she died peacefully in her sleep on July 28, 2018 at age 98. Betty is survived by two children, son Mark A. Hazlett (Dorothy H. Holland) of Honolulu born in 1948 and daughter Lenis A. Hazlett (Timothy Bresnahan) born in 1953 of Stanford and Pebble Beach, California. Mark has one daughter, Virginia H. Goodman (David Goodman) of San Francisco (a son Max died in 2004) and two step-children, Mark L. Holland and Deborah Holland Chun (Shaun Chun), both of Honolulu. Deborah has three children, Summer, Michael and Matthew Chun. Lenis has one son, Matthew Bresnahan (Anna Bresnahan) of Lodi and one daughter, Claire E. Bresnahan of Stanford. Claire has a daughter, Zoe Bresnahan. A private memorial service was held on August 2, 2018 for Betty at Alta Mesa Memorial Park in Palo Alto where she was buried next to Bill, her husband of 63 years.
Published by Paradise Post from Aug. 18 to Aug. 21, 2018.
To plant trees in memory, please visit the Sympathy Store.
MEMORIAL EVENTS
To offer your sympathy during this difficult time, you can now have memorial trees planted in a National Forest in memory of your loved one.
MAKE A DONATION
MEMORIES & CONDOLENCES
Sponsored by ParadisePost.com.
5 Entries
I"m truly sorry for your lost may God comfort you at this difficult time at 1peter5:10 he will make you firm, he will make your strong, he will firmly ground you.
November 14, 2018
TO THE FAMILY. I AM SO SORRY FOR YOUR LOSS. MAY THE GOD OF ALL COMFORT BE WITH YOU AT THIS TIME. JEREMIAH 29:11.

PR.
September 11, 2018
As you remember your love one, as God heals your broken hearts (Psalm 147:3), may your treasured memories bring you peace, comfort, and strength to endure.
September 9, 2018
Our condolences to the family. May God fulfill his promise of binding up the brokenhearted. Isa 61:1.
August 20, 2018
I am so sorry for your loss. May you find comfort from the loving promise of seeing our loved ones again (John 6:40). Please accept my deepest sympathie
S C
August 18, 2018
Showing 1 - 5 of 5 results