MARION ELEANOR IRVINE LEDERER
LEDERER Female, 91 years, of Canoga Park and Palm Springs, CA. Died April 7, 2011 at Palm Springs Desert Hospital, due to stroke and congestive heart failure. She was born February 10, 1920, to Oliver Bateman Irvine and Eva J. Irvine in Brampton, Ontario, Canada. Marion attended the University of Toronto and UCLA, and married actor/director Francis Lederer in Los Angeles in 1941. Together they served as ambassadors for UNICEF, represented the US Department of State in Czechoslovakia and founded the Canoga Park, California-Taxco, Mexico Sister City Program. After founding the Sister City Program, Mrs. Lederer served on its board of directors and was instrumental in its many years of success. This outstanding program of community and cultural affiliation has received national and international awards. She received the first Errol Newton Memorial Award for the cause of international understanding, the City of Los Angeles Human Relations Award for outstanding volunteer service, and The Board of Trustees of the Motion Picture and Television Fund award for dedicated service. Mrs. Lederer was Commissioner of Cultural Affairs for the City of Los Angeles (1980-1985), a founding member of the American National Theatre and Academy and a member of the executive board of the Women's Auxiliary of the Motion Picture and Television Fund and Screen Smart Set. She was an also an associate of the Braille Institute Desert Center. She is survived by her niece, Ann Charney and family of West Hills, CA, niece, Marion Colburn and family of Thousand Oaks, CA, sister-in-law, Ruby Irvine and family of Brampton, Ontario, Canada, and nephew, Tony Irvine of Toronto, Ontario, Canada. She was preceded in death by her husband, Francis Lederer, in 2000, her brothers Herbert Irvine of Toronto, Ontario, Canada and Christopher Irvine of Brampton, Ontario, Canada, and her sister, Marjory Irvine Honeyford, Toronto, Ontario, Canada. Private services are being held. Interment at Forest Lawn Mausoleum in Cathedral City. Donations in Marion Lederer's memory may be made to the Braille Institute Association of the Desert, 70251 Ramon Road, Rancho Mirage, CA 92270, or the Motion Picture and Television Fund, 23388 Mulholland Drive Woodland Hills, CA 91364. FOREST LAWN MEMORIAL PARKS & MORTUARIES
To plant trees in memory, please visit our Sympathy Store.
Published by Pasadena Star-News on Apr. 20, 2011.
MEMORIAL EVENTS
No memorial events are currently scheduled.
To offer your sympathy during this difficult time, you can now have memorial trees planted in a National Forest in memory of your loved one.
MEMORIES & CONDOLENCES
15 Entries
Thinking of Aunt Marion this holiday season. Hope she is celebrating with great wine, food and a dance or two with the angels. Love Brenda & Jeff
Brenda Wood
December 12, 2011
You brought such life to my life. I was so sorry that I was gone so long. You in your white Lincoln flying down the road. Everytime one goes by I see you. Miss our times together but looking at your hill I see you always.
James Fox
December 8, 2011
I light this candle in your honor
Carol Ulaner
September 2, 2011
While attending Pierce Community College in Woodland Hills, CA, during the late 1960s, I was fortunate enough to have taken a cultural appreciation course. Both Francis and Marion Lederer visited the class on several occassions to discuss performance and culture. Even today, some forty years later, I appreciate them taking their time to enlighten beginning college students. Thank you. Dr. John E. Tapia, Faucett, MO
John Tapia
August 31, 2011
As your insurance broker for so many years I felt that I grew up with you and Francis. Indeed I did, from a teenager working in my father's office to now, almost retired. You were part of the old, glamourous Hollywood, with style, taste and grace. I always appreciated all the work that you did for the Motion Picture Home, where my grandfather spent his last years in comfort.
Deborah Ryan
June 3, 2011
What a beautiful and incredible legacy she created during her time and is leaving behind. May she rest in peace. Her memory in the West Hills will remain and be honored at the Hidden Chateau and Garden for years to come.
. .
May 4, 2011 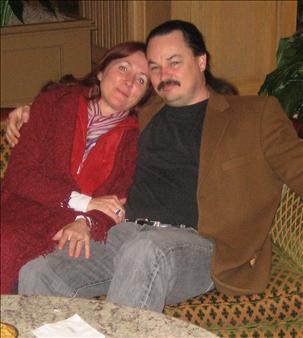 Aunt Marion was one of my favourite people. Elegant, humble, funny, dynamic, inspiring, giving and loving are just a few of the words that come to mind. She was the first person to introduce me to Eggs Benedict, when i was visiting LA as an impressionable young girl (around age 7). They remain my favourite breakfast treat and thankfully remind me of her every time. - Aunt Marion, I wish you peace and comfort as you transition to the next level. Love Brenda(Tost)and Jeff Wood.
Brenda Wood
April 28, 2011
We as a community are very grateful for the great contributions of Marion and Francis Lederer to the arts and culture in the West Valley. Their legacy will forever be present in the history of Canoga Park and West Hills. I hope their vision of creating a cultural center for the performing arts will become a reality in the near future. Our deepest condolences to the family.
Ed Crowe
April 27, 2011
Aunt Marion will be remembered as a beautiful, captivating woman. She had a gift for making you feel, not just welcome but special in her home. Between her vivacious manner, that brilliant smile and the fascinating tales of her adventures and her life, you always came away knowing that you had experienced a day that you'd never forget! And we never will; she'll be remembered forever.
Christine Irvine(Tost)and her Family
Tost Family
April 26, 2011
I will always remember the special memories during my childhood when I came to stay every summer with my Aunt Marion & Uncle Francis. Those were my most favorite times in my life. Aunt Marion was a truly special woman of elegance, class, & so beautiful as well. She will be forever missed. With Much Love Always, Your Niece Laurie Ann
Laura DavisAcosta
April 24, 2011
Thinking of a very special Aunt and rembering glamourous days past, generosity, love and laughter...end of an era.
The Rock Family
April 24, 2011
I was always in awe of Aunt Marion’s charm and charisma. She waltzed into any space beautifully and used words like “darling”. I loved listening to her speak and watching the tilt of her head as she gracefully listened to others. I also loved that she wasn’t afraid to throw back her head and laugh wholeheartedly. But she wasn’t just a beautiful and charming woman. She was smart, articulate, caring and passionate about life. She was an incredible role model for all woman and I’m so proud to be able to call her my aunt. Love you Aunt Marion. Thanks for showing us all how it’s done!
Angela Rutherford
April 23, 2011
Ms. Marion as I used to call her, was a very special and elegant lady. I would sit with her for hours and she would tell me wonderful stories about her life with her family and her beloved husband Francis. She truly lived a life of a fairy tale with her husband, whom she adored. She enjoyed living in the desert and having fun with her friends.
She instilled high values of education and elegance in me. She was an inspiration to me and I will truly miss her.
Martina Aguirre/ Nurse
April 21, 2011
Aunt Marion leaves an everlasting legacy of grace, spirit, laughter and light. Her passion and love of life will last, as an afterglow in our hearts. A true lady, if ever there was one.
Kristina Brics
April 21, 2011
In tribute to the life of Marion Lederer..Such an elegant woman who I got to know through The American National Academy of Performing Arts that was founded by her husband Francis Lederer. I studied many years with Francis and teach at the school to this day. As a result, I got to know Marion, she was a wonderful woman and I will miss her... just as I miss Francis..the impact that they had on my life cannot be measured. All of us at the school strive to carry on to honor their dream and memory.
Catherine Wilkinson
April 20, 2011
Showing 1 - 15 of 15 results