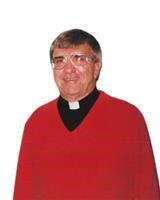 FUNERAL HOME
Berarducci Funeral Home & Cremation Care Center - Providence
26 Grove Street
Providence, RI
WOONSOCKET - Reverend George Laurent Allard, 87, distinguished senior priest of the Roman Catholic Diocese of Providence passed away recently. A Woonsocket native and long-serving priest in several area parishes, he was a son of the late Oliva and Gertrude (Coutu) Allard. Raised and educated here together with his siblings, Richard, Normand, Irene, and Gertrude, he attended Jesus-Mary and Precious Blood Elementary Schools and graduated from Mount St. Charles Academy in 1952. He was also a graduate of Our Lady of Providence Seminary College and St. Paul Seminary in Ottawa, Canada.

Father George began his recently celebrated 60 - year priestly vocation upon ordination by Bishop Russell J. McVinney in June, 1960, and throughout his pastoral-care and administrative career he touched thousands of hearts and souls while serving God and His people at St. Joseph's, Precious Blood, and St Charles' Churches in Woonsocket; St. Joseph's Church in Pascoag while also Chaplain at Zambarano Memorial Hospital, Wallum Lake; Our Lady of Consolation and St. Cecilia's Churches in Pawtucket; and finally at Christ the King Church in West Warwick.

Throughout his ministry, he considered himself "a people's priest" and was widely regarded as extremely personable, compassionate, and fiscally savvy. He thoroughly enjoyed all aspects of his assignments, shepherding the various parochial flocks he tended and supporting the many and varied activities associated with parish life including Boy Scouts, Knights of Columbus, adult and youth groups, general and Catholic School administration, and building and renovation projects for which he had a particular affinity.

Father George was a beloved member of the 'Lodge' community at the Village at Waterman Lake in Smithfield. His retirement years there brought him much satisfaction and contentment. He also enjoyed dining out and was an avid sports fan (when the Cable was cooperating)!

Athletic, outgoing, always socializing, sometimes feisty, he was always neatly dressed in one of his 'signature' red-checkered, button-down shirts. His admirable and life-long physical fitness and agility - the result of years of conditioning developed through his enjoyment of ice hockey, golf, tennis, swimming, and countless miles of walking, especially on RI beaches with his brother priests and more recently in the corridors and on the grounds at 'the Village' - together with his requisite charm and award-winning smile endeared him to many by whom his presence and positive influence will be sorely missed.

A Mass of Christian Burial for the repose of his soul was Concelebrated at Precious Blood Church, followed by burial at St. Mary's Cemetery in West Warwick. Memorial donations to any of the parishes he served would be appreciated.
Arrangements entrusted to the Berarducci Home, 185 Spring Street; please visit [ProvidenceCremation.com] for complete obituary and condolences.
Published by Pawtucket Times from Apr. 12 to Apr. 13, 2021.
To plant trees in memory, please visit the Sympathy Store.
MEMORIAL EVENTS
To offer your sympathy during this difficult time, you can now have memorial trees planted in a National Forest in memory of your loved one.
Funeral services provided by:
Berarducci Funeral Home & Cremation Care Center - Providence
MAKE A DONATION
MEMORIES & CONDOLENCES
Sponsored by Berarducci Funeral Home & Cremation Care Center - Providence.
1 Entry
May God's promise found in John 6:40, of the hope to see our loved ones again, comfort your heart and give you peace, strength, and hope in the days ahead.
April 15, 2021
Showing 1 - 1 of 1 results