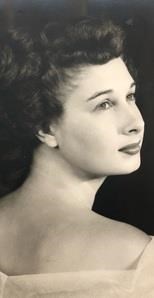 July 12, 1927 - September 19, 2021 Marilyn Raymer recently passed away peacefully at her home in Riverside. She was 94. Marilyn was born in Riverside, California to Ruby and Atrilla Mack, the youngest of four daughters. She spent her early years in Riverside, attended Poly High School, and eventually met and married her husband, Edward C. Raymer, a Navy sailor. Together, they traveled the United States, eventually being transferred to the Philippine Islands, where her husband, then a Commander (USN), was attached to the U.S. embassy. Edward retired in 1968 in San Diego, but the lure for home was great, and they resettled among friends and family in Riverside in 1980. After retirement, they continued to travel around the U.S. and Europe. Marilyn's humor and wit enabled her to fit in well with other Navy wives, with foreign dignitaries, and with children she taught in school, but also made her a favorite with family and friends alike. She took great delight in meeting new people and in conversations with family and long-time friends. She was creative and dabbled in painting, music, and even acting, but perhaps her greatest joy was the time spent raising her three sons Marshall, Chris, and Terry. She exhibited the joy of life until the days of her passing. She is survived in her immediate family by her three sons: Marshall (Laura), Christopher (Jerrie), and Terrance, and her six grandchildren and 10 great grandchildren. She is also survived by her sister June Walker (Charles) of Riverside. She will be laid to rest in a private ceremony.

Published by The Press-Enterprise on Oct. 9, 2021.
To plant trees in memory, please visit the Sympathy Store.
MEMORIAL EVENTS
To offer your sympathy during this difficult time, you can now have memorial trees planted in a National Forest in memory of your loved one.
MAKE A DONATION
MEMORIES & CONDOLENCES
1 Entry
Our thoughts and prayers are with your family.
McNeils
October 10, 2021
Showing 1 - 1 of 1 results