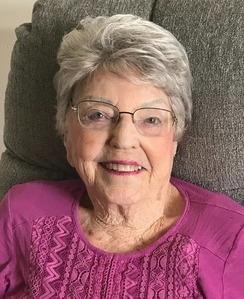 BORN
1922
DIED
2021
Dec. 18, 1922 - Sep. 03, 2021 DOROTHY FAYE SHAFTO SMITH, a beautiful, lovely lady, went to be with our Lord on September 3, 2021, in Nampa, Idaho, at the age of 98. She was the ?rst born to Marvin and Blanche Shafto on December 18, 1922 in Kearney, Nebraska. Dorothy grew up in Kearney and graduated from Kearney High School. She attended Kearney State Teachers College until she met the love of her life, Ellsworth "Smitty" Smith. Dorothy and Smitty were married January 20, 1941 in Grand Island, Nebraska. Times were different then; they celebrated by going to a movie and then back to their hotel. After they were married they moved to San Diego where Dorothy worked as a waitress and Smitty worked in a defense plant. It was war time so it wasn't long before Smitty was drafted into the Army Air Force and they moved back to Kearney where Dorothy would be near family and friends while Smitty went to Alabama for boot camp training and then sheet metal repair training. In January 1945 their only child, Wayne, was born. Needless to say, each January there was always a lot of celebrating. In 1954 the opportunity arose for them to move to Burbank, CA with her parents and younger siblings. After selling their worldly possessions they moved to Burbank with her parents and opened a small cafe. Dorothy's mother was well known for her delicious cinnamon rolls & it wasn't long until the City knew about the cinnamon rolls. However, they soon learned that it takes a lot of cinnamon rolls to make a living in the cafe business. In 1957 when all of Dorothy's siblings were grown and married, Dorothy and Smitty moved along with her parents to Corona, CA where Dorothy became employed by The Fleet Missile Systems Analysis and Evaluation Group and what is now known as The Naval Surface Warfare Center, Corona. Most of the time her work involved recruiting civilian Personnel for scientific positions within the Technical Directorate and other NWS, Seal Beach agencies. During her tenure, because of her exemplary performance, she was recognized with three Superior Performance Awards. After 26 years Dorothy retired and devoted many hours of her time to her church. She was an avid bridge player, golfer and also enjoyed working jig saw puzzles, knitting and crocheting. Dorothy is survived by her son, Wayne, of Western, NE, her sister, Marve, of Sacramento, a brother-in-law, Jack Trout, of Studio City, CA, her adopted family Penny and Randy Campbell & their children of Nampa, Idaho, many nieces, nephews, great nieces and nephews and many, many friends. She was preceded in death by her parents and siblings, Donald Shafto, Phyllis Saunders, Carol Kay and Janet Trout. DOROTHY, YOUR MEMORY WILL LIVE IN OUR HEARTS FOREVER After a private ceremony placing her ashes with her husband at Riverside National Cemetery, a Celebration of Life will be held for family and friends at 1:00 p.m., October 18, 2021, at Crossroads Christian Church, 2331 Kellogg Avenue, Corona, CA 92881. In lieu of ?owers donations may be made to Harrison's Hope Hospice, 3137 S. Meridian Road, Suite 120, Meridian, ID 83642.

Published by The Press-Enterprise on Oct. 10, 2021.
To plant trees in memory, please visit the Sympathy Store.
MEMORIAL EVENTS
Oct
18
Celebration of Life
1:00p.m.
Crossroads Christian Church
2331 Kellogg Avenue, Corona, CA
MAKE A DONATION
MEMORIES & CONDOLENCES
2 Entries
May God bless you and your family in this time of sorrow.
Rena
October 24, 2021
Dear Smith, sending my sincere sympathy my heart goes out to you currently of great sadness. Please know that God cares about you, how you feel and invite you to let them help you. Jeremiah 29:11,12
JP
October 12, 2021
Showing 1 - 2 of 2 results