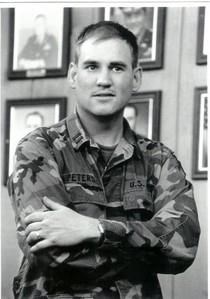 BORN
1970
DIED
2021
FUNERAL HOME
Miller-Jones Mortuary & Crematory - Moreno Valley
23618 Sunnymead Boulevard
Moreno Valley, CA
Age 50, Waldorf passed away Thursday, September 9, 2021 at the Suburban Hospital in Bethesda, Maryland after a brief hospitalization. He was 50 years old and just a few days short of his retirement date from the U.S. Army. Born in Long Beach, California, October 29, 1970 to Bonnie and the late Nick Peters. Survived by wife, Paige and children, Aubrey, Harken, Pearl, Madeline, Chris, and Stellan; brother Rob & Traci Peters; sister, Lynn Peters; nephew Mitch & Sarah Peters; niece Ashley; grandchildren: Gianna, Riley Jean, Kayden, D'Lonte & Hunter SkyKing. Peters was a 1988 graduate of the first class of Temecula Valley High School. He studied at the University of Oregon where he received a Bachelor of Social Science degree in History in 1992. Early in his career, Don was writing for various papers to include his alma-mater, the Oregon Daily Emerald where he first cut his teeth in journalism and the world of public affairs. Don will always be remembered as a loving husband and family man. He adored his family, friends, and four dogs. He traveled to Italy in 2014 where he met the love of his life, Paige. They married a few months later at the Pentagon Memorial Chapel and a second time at Whispering Oaks Terrace. An avid sports fan, that love carried over in the care of his children as he found every opportunity to volunteer as a coach. He helped coach his son, Stellan in his first year of playing baseball while Don was assigned in Kaiserslautern. He also shared his love of sports with the military community; while stationed in Germany, Don had a sports talk radio show that aired every Monday for Armed Forces Network. Peters joined the California National Guard in 1991, enlisting as an infantry soldier. He attended Officer Candidate School and was commissioned as an Army Infantry officer in 1992. Don's first platoon sergeant noted that then Lt. Peters was respected by the men that he served with because of his enthusiasm to learn the way of the warrior leader. Don dedicated more than 30 years of his life to the Army, serving in both the National Guard and Active components, including a combat tour in Iraq. Don served as an Infantry Company Commander in the National Guard before becoming a Public Affairs Officer. When he transitioned to the Active Component, he served again as an Infantry Officer before coming back to the public affairs community. As a Public Affairs Officer, Don served as the Deputy for 18th Airborne Corps at Ft. Bragg and in Iraq, the Army Corps of Engineers, and multiple assignments here at the Office of the Chief of Public Affairs in both the Media Relations Division and the Strategy and Plans Division. Peters received numerous awards for superlative service, most notably the Military Order of Saint Gabriel in 2017, a recognition for his significant contributions to the U.S. Army Public Affairs community and practice. Funeral Services for Lt. Col. Don Peters will be held Monday the 27th of September in Moreno Valley, CA, Miller-Jones Mortuary, viewing at 10:00 a.m., funeral to follow at 12:00 p.m., with graveside full military honors at Riverside National Cemetery at 2:00 p.m. & Wake (Hawaiian casual because he hated Army Service Uniform shoes) to follow at Whispering Oaks Terrace at 4:30 p.m. Should you choose to donate on behalf of Lt. Col. Don Peters, consider donations to Allied Airlift 21, alliedairlift21.org, a group of Americans, all volunteers, contributing to the historic "Digital Dunkirk" effort to get our Afghan partners and allies out of danger. Don was a staunch advocate of the organization and worked tirelessly to help save as many lives as he could up until the day of his death. 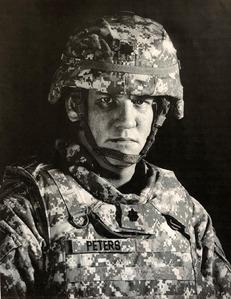