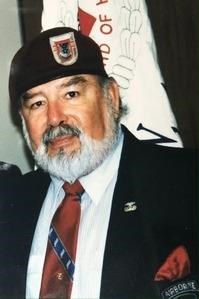 Robert (Bobby) Florez February 21, 1940 - September 17, 2021 Robert Florez was just one person, but he was the world to many. He was born on February 21, 1940, in Bakersfield, CA to David and Estella Florez. Robert was the first of four children. He was born a gentle and kind spirit, with innate athletic ability, artistic creativity, and a giving soul. He used his heart and hands to do many great things in life. Robert (Bobby) was a talented football player at Shafter High School, a tough and ready defensive back, and was a key member of the track team as a hurdler, lettering Varsity in both sports respectively. Growing up in Shafter's Mexican Colony (Colonia), Robert was the first to graduate high school in his family. After his graduation in 1958, he found his first job at Riverside Cement as a miner. He joined the Army in 1962 and was sent on his first tour of duty in Vietnam in 1963, as a part of the 173rd Airborne unit. Bobby survived Vietnam and was a skilled parachuter. Robert was honorably discharged from the Army in 1965 and immediately returned to his job at Riverside cement plant, where he retired thirty years later in 1995. Upon his return, Bobby actively participated in various Veterans' groups, traveling across the nation and the world as an outspoken ambassador for Vietnam veterans. Bobby was a giver in life, always sharing memorabilia from his travels with every person in his family. He was a proud artist and craftsman, producing hand-carved walking sticks, unique jewelry, and always had a Vietnam-themed artifact on hand for his family and friends. He was also a lover of classic and vintage autos. Bobby was a proud and doting uncle, often traveling to attend key moments for his many nephews and nieces. He was not a man of many words, but he was a man of much laughter and loved sports. Rarely did he miss listening or watching a professional sporting event, especially if it involved USC, Raider, or Dodger games. He was also a prominent booster of UC Riverside's baseball team and gave generously to the University athletic program, at times even housing college athletes at his home in Riverside during the school year. Most of all, Bobby helped people those he knew and those he did not. Someone once described Bobby as a person who would give the shirt off his back to anyone who needed it. He was a popular man because of his kind and gentle ways, especially in the Veteran community. Many will miss his brilliant smile, his hearty laugh, and his endless joy in watching somebody receive a gift from him. Bobby is survived by his brothers and sisters: Ray Florez of Shafter, Sandra Florez of Shafter, and Janet Florez of Grover Beach. Immediate Nephews and Nieces: Dean Florez, Ryan Hernandez, Kris Florez, Michaela Hernandez, Gregorio Breedlove, and Matthew Garcia. Bobby is survived by great-nephews, nieces, and godchildren, too many to name. Bobby was preceded in death by his father, David Florez, and his mother, Estella Florez, from Shafter, California. Open Casket viewing will take place from 4 p.m. to 7 and Rosary from 7 p.m. to 8 p.m. on Wednesday, October 6, 2021, at Saint Francis De Sales Catholic Church, 4268 Lime Street, Riverside CA 92501. Mariachi Mass will take place, 10 a.m. to 11 a.m. on Thursday, October 7, 2021, at Saint Francis De Sales Catholic Church, 4268 Lime Street, Riverside CA 92501. A celebration of Bobby's Life will be held at the Spanish Art Gallery at The Mission Inn 3649 Mission Inn Ave, Riverside, CA 92501 immediately following the mass. Full Military Burial will be held 11 a.m. to 12 p.m. on Wednesday, October 20, 2021, at Riverside National Cemetery Columbarium, 2249 Van Buren Blvd, Riverside CA 92508. An Honoring Reception will be held immediately following Military Burial. In lieu of flowers, please consider donating to Vietnam Veterans Memorial Fund, 1235 South Clark Street, Suite 910 Arlington, VA 22202.