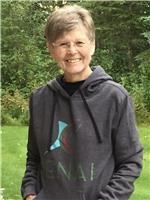 BORN
1942
DIED
2021
Carolyn Ostrander, 79, of Soldotna Alaska passed away at home surrounded by her family on July 13, 2021 after a lengthy battle with cancer.
Carolyn was born on January 28, 1942 in Middleton, Wisconsin to Al and Bernice (Murphy) Monum. She grew up in Middleton, attending Middleton High School. She was the first member of her family to attend college, graduating with a degree in education from the University of Wisconsin, Madison in 1966. She began her career as a teacher in Delavan Wisconsin where she met Dennis Ostrander. Dennis and Carolyn were married on June 17, 1967.
Carolyn and Dennis drove the Alcan Highway to Alaska shortly after getting married, making the trip in a 1965 Ford Mustang, hauling a tow behind camper, selling both in Haines Alaska before making the final trip to Yakutat, Alaska where they purchased the only vehicle for sale in town, a Dodge Power Wagon with questionable heat and no brakes. Thus, began a life full of adventures, always shared by the two of them. One of Carolyn's favorite memories from those early years was the summer of 1970 when Carolyn, Dennis, and Carolyn's nephew, Tom Satter ran a commercial setnet sight on Kalgin Island. Her son Paul was there too but wasn't much help as a 2 ½ year. Carolyn loved the rugged remoteness of the Island and embraced a lifestyle with none of the comforts of modern-day society. Carolyn's mom visited Kalgin that summer for several weeks, an adventure she spoke of often for the rest of her life.
Carolyn enjoyed a full career as a teacher and librarian with the Kenai Peninsula School District, retiring in 1987 but continued to pursue her passion as a librarian after retirement, including several years working at the International School of Bejing. Dennis and Carolyn traveled extensively, covering much of the globe. Carolyn was an artist, accomplished using multiple mediums, and was a published author and poet. She continually strove to better herself – she achieved her Masters of Library Science from the University of Wisconsin, Lacrosse in 1993, and was a voracious reader.
Carolyn was a beautiful person - genuine, caring, and thoughtful, and deeply impacted the lives of many people. She was the greatest wife, mom, and grandma imaginable and will be missed every day by those that knew her.
She is survived by her husband, Dennis Ostrander, son, Paul (Teri) Ostrander, her two grandchildren, Taylor and Allie Ostrander, her two sisters, Marcia Satter and Jean Fitzsimmons and many cousins, nieces, and nephews.
At Carolyn's request, no public service is planned. In lieu of flowers, the family requests any donations in Carolyn's honor be made to Hospice of the Central Peninsula.
Published by Peninsula Clarion on Jul. 30, 2021.
To plant trees in memory, please visit the Sympathy Store.
MEMORIAL EVENTS
To offer your sympathy during this difficult time, you can now have memorial trees planted in a National Forest in memory of your loved one.
MAKE A DONATION
MEMORIES & CONDOLENCES
Sponsored by Peninsula Clarion.
6 Entries
Though most of our writing group never had the opportunity to meet Carolyn in person, we enjoyed an online friendship with her for over 16 years. Carolyn was the kind of person we aspired to be...kind, creative, adventurous, and willing to pour into others to help make their dreams come true. We will miss her children's stories and the tales of her real-life escapades, but more than that, we will miss her. Please know that we are praying for your family as you walk through this valley of grief. May you find joy and comfort in knowing that Carolyn was well-loved...and loved well. --The Short Stuff Group Joe Schertz Donna Therrien Judie Offerdahl Lindsey Hobson Donna Earnhardt Cindy Breedlove
Shortstuff Critique group
October 11, 2021
Carolyn was a member of our critique group, Short Stuff. She was so spot on and gracious with her comments and suggestions. She is missed.
Cindy Breedlove
October 8, 2021
Dear Denny & Family, I met Carolyn when she came to work at WSU Library, she was such a delight to be around, always positive and so easy to visit with. We kept in touch through lunches until she moved back to Alaska. My life is better having known Carolyn. She always talked so lovingly about her family. My deepest sympathy to all of you.
Paula Stephens
September 29, 2021
I worked with Carolyn at the library at Winona State. She was a very lovely woman, very kind and caring. I am so saddened to hear of her passing. My condolences to the family.
Marcia Schultz
Work
September 29, 2021
May your hearts soon be filled with wonderful memories of joyful times together as you celebrate a life well lived.
Me
July 31, 2021
We are so sorry to hear about Carolyn. Condolences to all.
Robert and Eileen Collins
Friend
July 29, 2021
Showing 1 - 6 of 6 results