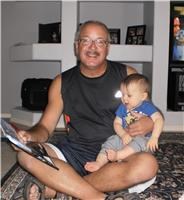 BORN
1962
DIED
2021
It is with heavy hearts that we announce the passing of Kevin Andree of Cave Creek, Arizona and formerly of the Kenai/Soldotna area, on July 18th, 2021.

Kevin was preceded in death by his father, Bob Andree, and by his brother, Keith Andree.

Survivors include his daughter, Brittany Tapley and her children Lincoln and Rory Jackson; his mother, Bobbie Seelinger; his sister, Kelly Andree; nieces Nickey Andree and Cori McCloud; nephew Kyle Andree; and of course, all of his friends who were like family.

Kevin retired after 37 years of working - first at the Soldotna Carwash, then guiding and working at the Eagle Roost Lodge on the Upper Kenai, to beginning his oilfield career with Udelhoven Oilfield System Services and finally the 33 years he was with Arco/BP/ConocoPhillips at Kuparuk on the Slope.

His many interests have included fishing with family and friends on the Kenai River, golfing, motorcycling and ATVing, and building and flying RC airplanes. He was also an avid collector of model trains and slot cars. All of these passions brought Kevin much joy, but nothing compared to the love he had for his daughter Brittany.

Please join us in celebrating Kevin's life at Birch Ridge Golf Course in Soldotna on Sunday, August 22nd at 3pm.
Published by Peninsula Clarion on Jul. 28, 2021.
To plant trees in memory, please visit the Sympathy Store.
MEMORIAL EVENTS
Aug
22
Celebration of Life
3:00p.m.
Birch Ridge Golf Course
Soldotna, AK
MAKE A DONATION
MEMORIES & CONDOLENCES
Sponsored by Peninsula Clarion.
10 Entries
Kevin - Many fine years together working with you in Alaska. I will look for you in the Northern Lights, and the memories will always make me smile.
Rick Kaiser
Work
August 3, 2021
I have lots of Is special memories of Kevin. He was the love of my life in our younger years and shared a home and family together for 6 years .I remember when him and his brother and father all lived together there was alot of good times in that house .Then Kevin and I moved in to a house my father build us and he would get home from working out of town and would have his friends over all the time to play games and do mobel cars and planes, go fishing golfing his friends Jonn, Russell,Johny Walt, Bill Randel Joe brother .Kevin was a very Good guy and a great BF treated me very well .I moved away and both had new lives but I was blessed to reconnect with Kevin 28 years later and enjoyed spending time with him in Arizona and him coming to Folsom ca where I live .I will always remember Kevin as a nice,caring ,funny, loved the 80's music and that smile and laugh.Now rest in piece in heaven with Grandma ,Father and brother .u will be missed Michelle Baker (Shelly Moreno)
Michelle Baker (Moreno)
Friend
August 2, 2021
Let´s not forget that Kevin was an avid snow machine enthusiast; our family of 5 each had our own ride; we also were fortunate to have a lake lot and jet skis....a lot of family and friends shared special times at the lake.
Robin Turnbull Andree
Friend
August 2, 2021
This hits me hard, Kevin was a great guy, he pushed me and expected a lot, as he expected a lot from himself. Both Kevin and Keith were helpful when I was at Kuparuk and I miss them sorely...
Jessi Vigus
Work
August 2, 2021
Had lots of fun playing golf with Kevin and Keith! Many years ago.
Bruce Kay
July 30, 2021
This is extremely sad. Kevin will truly be missed. Thoughts and prayers to the entire family.
Lori Malston Mason
Friend
July 29, 2021
I´m so sorry. May he Rest In Peace and rise in glory. I remember the good whenever I look at our daughter.
Janet
Family
July 29, 2021
This is extremely sad news. I am so sorry for your loss. Kevin will be missed. My thoughts and prayers to the family during this difficult time.
Cherie Darrow Curry
Friend
July 28, 2021
Grief can be so hard, but our special memories help us cope. Remembering you and your loved one today and always. I went to school with him, he was such a sweet guy please accept my condolences
Evelyn Ross Redding
School
July 28, 2021
Loved being married to you for 16 years; loved having a `family´. So thankful we became `friends to the end´. I miss sharing our chats and emails. You will always be in my heart. Robin
Robin Turnbull-Andree
Friend
July 28, 2021
Showing 1 - 10 of 10 results