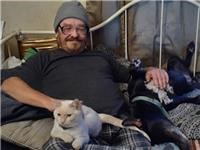 BORN
1963
DIED
2021
FUNERAL HOME
Peninsula Memorial Chapel
5839 Kenai Spur Hwy.
Kenai, AK
Nikiski resident, Mr. Micheal D. "Papa Bear" Delay, 58, died Wednesday, July 7, 2021, at his home in Nikiski with his family by his side.
A celebration of his life will be held from 12:00 noon Saturday, July 31, 2021 going till August 1st at 9:00 pm. at his house located at 49475 Arctic Circle in North Kenai. The service will be a blend of Tao and Native American. The family asks if you attend, to please bring a written favorite memory or memories of Micheal to add to his memory book. If you cannot attend, but wish to share a memory, they can be mailed to P.O. BOX 432 – Kenai, AK 996611 D/O the Delay Family.
Micheal was born June 3, 1963, in Oakland, California. He graduated and later joined the U.S. Marine Corp where he serviced up until he was honorably discharged in 1988. In 1999 he moved to Soldotna where he lived before moving to Kenai and most recently moved to Nikiski. He worked as a Security Consultant and Guard for a few years. Micheal was trained to be a peer support specialist to facilitate a domestic violence shelter for men. He enjoyed DnD, computer games, and wood working.
The family wrote, "Micheal was a son, a brother, a lover, a father, a husband, a grandfather, a warrior, and a peacekeeper. First and always, he was a U.S. Marine. Champion for the "Under Dogs" of the world."
Michael touched many lives and will be greatly missed by more people than he could have imagined! The family is wanting to collect favorite memories of Micheal, to be kept for his grandchildren.
He was preceded in death by his mother, Sarah, Eldest daughter, Cheri-Lee, His dogs Sala, Ghost, and Tucker and his Cat Pann.
He is survived by his wife, Dara Lane Delay AKA "Mama Bear" of Nikiski; brother, J.R. Crispen of Reno, Nevada; sons, Jamie Brunski and family of Ireland and Talon Osterhout-Delay of Alaska; daughters, Ashlie Hetrick of Soldotna, Nadia Carmack of Washington, Alicia Osterhout of Washington; brother, Stephan Dempsey of Kenai and son, Dakota Van Daam of Nikiski.
Memorial donations may be made in Memory of Micheal to Peninsula Memorial Chapel or the Wounded Warriors Foundation.
Arrangements made by Peninsula Memorial Chapel & Crematory.

Published by Peninsula Clarion on Jul. 28, 2021.
To plant trees in memory, please visit the Sympathy Store.
MEMORIAL EVENTS
Jul
31
Celebration of Life
12:00p.m.
his house
49475 Arctic Circle, North Kenai., AK
Funeral services provided by:
Peninsula Memorial Chapel
MAKE A DONATION
Please consider a donation as requested by the family.
MEMORIES & CONDOLENCES
Sponsored by Peninsula Clarion.
1 Entry
May the love of friends and family carry you through your grief.
Me
July 29, 2021
Showing 1 - 1 of 1 results