Here is a brief account of the life of a truly peerless man, Dr. Dennis Wilcox, who passed away after a long and hard battle against pancreatic cancer on October 17, 2013. Many people have known Denny for decades, and others might only have known him for a short time. Denny touched this community, and here we commemorate his life in the best way we know how. If we get a date or two wrong, take it up with Denny.

Denny was born in the fall of 1945 in Wenatchee, Washington, to Irwin and Pauline Wilcox, who predeceased him. He grew up in the town of Peshastin on an apple orchard. After a harrowing childhood running amok in the orchards and learning about hard work and laughter, he graduated from Bothell High in 1963. He tried college in Montana and at the University of Washington before enlisting in the Navy in 1967 with the goal of becoming a frogman (later SEAL and earning his Trident). However, after the required tests, his commanding officer informed him that he was going to be moved over to aviation. As Denny would say "I can't spell it, I might as well become one," and he did. He made a great pilot.

He graduated with "wings" from Pensacola, Florida, and was assigned to the VAW-124 squadron (a plank group) to fly E-2A Hawkeye, or "Hummers" as they were affectionately known. Due to his diligence and sh­arp eye for detail, he became the Safety Officer for the squadron. His first deployment after graduation was on the aircraft carrier Independence stationed in the Mediterranean.

Denny met Linda Ann Thomas in December of 1964 and finally got her to agree to marry him on May 9, 1967, once he had graduated from flight school. After serving in the Mediterranean, he was reassigned stateside at Norfolk, Virginia, and completed his tour of service in 1969.

He re-enrolled in college and received his bachelor's in biology from Western Washington State College while continuing his Navy Reserve commitment at Whidbey Island and generally staying as busy as he usually was… This past year his son, Craig, arranged for him to fly a P-51 Mustang, and he had a great time buzzing the Sound and Whidbey Island, too. He tried to make a strafing run at a sub that was in the water, but got stopped before they shot him out of the air.

Having worked at Animal Medical Clinic in Bothell as a teenager, he applied and was accepted into the Washington State University College of Veterinary Medicine in 1974 and graduated in 1978. During that four-year stint of being hammered into the total class act of a veterinarian that he was, he made friends, saved lives and handled stress that would have dropped most men or women his age.

He joined Animal Medical Clinic after graduation and worked there for a period of 2 years and sharpened his skill sets as a vet. During that time, his oldest son, Barry, was born. The same year the family flew to Hawaii so Denny could run in the Honolulu Marathon, an aspiring goal of just being able to finish, which he did.

In 1980, he purchased the Angeles Clinic for Animals (Lars Sharpe's practice) and excelled at making the practice fly at the highest degree of standards available. For over 25 years, his practice was recognized as an outstanding American Animal Hospital Association member (AAHA).

In 1984, his second son, Craig, was born, and with two boys who were growing up to be competitive swimmers and cyclists, Denny kept busy on the sports scene being an avid and ardent supporter of his sons. Both young gentlemen have excelled in their respective fields with integrity and honor. And though they might not have appreciated it, Denny was extremely proud of them and bragged about them a lot, in his own way.

Denny actually admitted to being a "Type A" personality, so just running a hospital, doing surgery 12 hours a day, going back and forth with all his community activities and being involved in his sons' sports left him too many unfulfilled seconds in a day. He began to look for another outlet for his constant quest for knowledge. Denny was active in the Lions Club, United Way, Law Enforcement Board, was President of the Humane Society, and served as a Civil Service Commissioner of Clallam County. And he still didn't fill up every second of every day. This defines a Type A personality!

Having trained in martial arts — achieving a third degree black belt — and exposed to the perceptions of the Orient, he decided to learn Traditional Chinese Veterinary Medicine — in his spare time, of course. Being the rigorous student that he was, he managed to be the very first Western veterinarian to receive his masters in China from the South China Agricultural University. Still holds this record today. Considering that he spoke little, or actually no, Mandarin Chinese, his accomplishment is phenomenal. After defending his thesis, South China Agricultural University asked him to come teach Traditional Chinese Veterinary Medicine. Why? Because he not only understood Chinese Medicine, he lived it.

Denny and Linda parted ways during this period of his life. It was a difficult time and decision for all parties involved, but, in the long run, was the best decision to be made. Both Denny and Linda found great partners later to compliment their lives, and they still cared about and for each other, to the best of their ability, in support of their children and now their precious grandchildren.

While in China studying Medical Qi Gong, Kathleen basically told Denny to go climb a mountain, and, believe it or not, that is exactly what Denny did! That day, wandering on the mountain, he had a bit of an epiphany… an epiphany that was to outline the rest of his life. He came back to Washington and got his life in order.

Denny and Kathleen reconnected a year later when Master Wan Su Jain paired them to work together. They corresponded, talked, took long walks, worked on energy healing together, and were married in 1999 on the shores of Lake Tahoe. They worked together with Qi Gong energy techniques, craniosacral healing and nutritional therapy for all their patients, both two- and four-legged.

Denny invoked his "exit plan" from the veterinary hospital and sold the practice to a corporate buyer. Twelve days after the sale, he was diagnosed with pancreatic cancer and thus began the hardest battle of his life. Denny, being the great student that he was, researched his cancer and probably knew more about the drugs, options, treatments and surgeries than most of the oncologists whom he talked with. He knew the odds were long, the prognosis grave, and yet he continued taking care of people and animals with a grace and humor that everyone appreciated. When asked what therapy he was using, he always replied, "Gunpowder and lead."

Kathleen and Denny spent the last few years following a new passion that they shared, in learning everything they could about shooting and self-defense. Time was spent at Sig Sauer Academy training and at Gunsite for open and closed environment ranges, and in learning to be a SWAT team medic. Denny always said that Kathleen could outshoot him, was faster and a better shot then he was, and when you consider that Denny put five rounds into a 4" x 4" square from 1,330 yards, it would seem prudent to not get Kathleen upset in the near future!

There are not many pictures of Denny Wilcox. He was as camera shy as the elusive Bigfoot, but on the day that his youngest son was commissioned as an officer in the Navy, Denny allowed himself to be photographed. Denny was an extremely quiet man, with a strong sense of Duty, Honor and Service. Being able to pin LTjg bars on Craig was his continuation of family history, going back for a hundred years in serving his country.

Denny is survived by his beloved wife, Kathleen; son, Barry Wilcox; son, LTjg Craig Wilcox and his wife, Tiffany; and three grandchildren, Cooper, Paisley, and Lola; as well as his sister, Kay Simon; and numerous nieces, nephews, and cousins.

Dennis had been a member of the Church of Jesus Christ of Latter-day Saints since 1977 and served in various church callings. With his faith in God, his honor and integrity, he strived to remain strong, enduring a difficult time during adversity.

Therefore, we celebrate the life of a man, who lived his life fully — lived it with Honor, Integrity, Dedication, and Quest for Knowledge and Excellence in all things. So mote it be.

A CELEBRATION OF Dr. Dennis Wilcox's life will be held at 11 a.m. this Saturday (Nov. 30) at the Port Angeles Stake Center (Church of Jesus Christ of Latter-day Saints), 591 Monroe Road, Port Angeles.

Memorial contributions may be made to the Olympic Peninsula Humane Society, P.O. Box 3124, Port Angeles 98362 or via www.ophumanesociety.org/donate.


Published by Peninsula Daily News on Nov. 27, 2013.
To plant trees in memory, please visit the Sympathy Store.
MEMORIAL EVENTS
To offer your sympathy during this difficult time, you can now have memorial trees planted in a National Forest in memory of your loved one.
MAKE A DONATION
MEMORIES & CONDOLENCES
10 Entries
Dr. WIlcox was a wonderful vet for our animals during the time we lived in Port Angeles. We thought highly of him as a doctor and a person. We join his many family and friends in mourning his loss.
Jessica Schreiber
December 3, 2013
I enjoyed reading about Dr. Wilcox...he had tenacity...God be with you as you move forward without him...what a wonderful husband, father and friend to all including his caring of all animals...
Kim Payne
December 2, 2013
He will be greatly missed by both his two and four legged friends.
Tracy Rexrode-Allan
December 1, 2013
Denny was very special to our family as not only our vet but dear friend as well. He even buried one of our dogs on his property! He must have been needed pretty bad in heaven to leave at such an early age. We will always treasure him in our hearts.
faith & Curt ohlson
November 30, 2013
Dr. Wilcox leaves a legacy of good humor, compassion for animals, and life lived to the fullest. And who could forget the $496.00 hairball?! My heartfelt condolences to the family of Dr. Wilcox, an extraordinary soul indeed.
Marybeth Hamblen
November 30, 2013 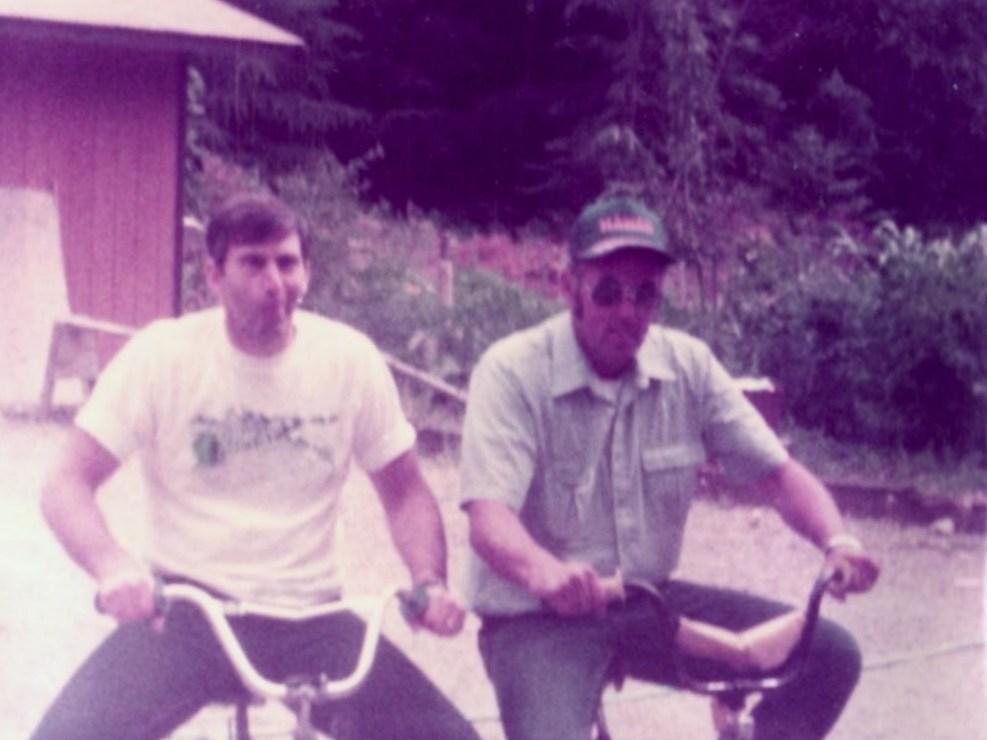 As Cousins only 2 weeks apart in age Denny and I shared a lot in common. We rejoiced through the good times and consoled each other in the bad times. Even though we did not spend a lot of time together in the later years we still remained close he will be greatly missed.
Jim Tobin
November 29, 2013
prayers for the family. He was a good man.
deedee reaume
November 27, 2013
I've known Denny for many years. Not only was he our vet, he was our friend. Loved his sense of humor and easy going character. He will be missed. Until we meet again.
Alyce Hillman
November 27, 2013
Dr Wilcox was our vet from 1985 when we moved to Port Angeles until we left in 2000. I still called back periodically for referrals for vets as we moved around Washinton. He was an excellent vet and just a terrific guy. I am sure his family and friends will meiss him very much.
November 27, 2013
We sorely miss our dear friend Dennis. May he rest in peace, and may the good Lord take good care of Kathleen during this difficult time. With love and prayers, Ed & Becky Upton
November 26, 2013
Showing 1 - 10 of 10 results