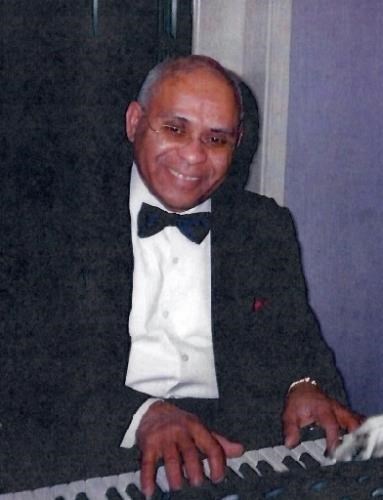 BORN
1936
DIED
2021
FUNERAL HOME
Jesse H. Geigle Funeral Home, Inc.
2100 Linglestown Road
Harrisburg, PA
Byron "Jimmy" Wood – Pianist, composer, arranger from Susquehanna Township passed away on November 18, 2021 at UPMC Harrisburg Medical Center. Born in Philadelphia on March 15, 1936 to James and Marjorie (Alexander) Wood and reared in Harrisburg, "Jimmy" Wood's destiny as a musician was plotted in his youth. In the late 1940's and 50's, his mother, the pianist Marjorie Wood of Marj and the Majors, was a pioneer bandleader and music director, one of whose ensembles included Philly Joe Jones. Another of Mrs. Wood's side persons was trumpeter Ron Waters, who would become Jim's lifelong friend, teacher, and collaborator. A 1954 graduate of John Harris High School and a U.S. Air Force veteran, Jim proudly served our Country. Before settling down in Harrisburg, Jim traveled and performed in Europe and North Africa with fellow Air Force musicians. A member of Ron Waters's renowned Latent Image, Wood has been performing as a leader and sideman for more than 60 years. He played with the late cornetist Nat Adderly; the trumpeters Cecil Bridgewater, Valery Ponomarev, and Donald Byrd; and saxophonists Nathan Davis and Odean Pope. Jim and his trio also collaborated with the Harrisburg Symphony, under the direction of Larry Newland, in the symphony's first Pops concert, featuring the works of George Gershwin and Edward Kennedy "Duke" Ellington. Jim was music director for Open Stage of Harrisburg's production of Lady Day at Emerson's Bar and Grill with bassist Keith Mohler, saxophonist Tim Warfield, and singer Andrea Pinkett. In addition to his lifelong contribution to music, Jim had a 35-year career in State government. He retired as the EDP Manager at the PA Bureau of Workers' Compensation Department of Labor and Industry. Jim held memberships in the 48th Communications Squadron, The Harrisburg Musical Association, and the Central PA Friends of Jazz. Jim entered the CPFJ Hall of Fame in 2003 and received the 2005 "Spectrum Award for Excellence in the Arts." Truly a gentleman of his community, Jim was a volunteer for the Heinz -Menaker Senior Citizen Center in Harrisburg. Jim will be missed dearly by his loved ones. He is survived by his loving wife Susan; his son James A. Wood and fiancé' Becky Treier, and son Byron J. Wood, Jr; sisters-in-law Marjorie Varnicle, and Barbara Williams and her husband Michael; former wife, India Wood; cousin Buddy Alexander and his wife Marlene; and several nieces and nephews who perfectly sum up who Jim was- "Uncle Jimmy was a great man and lived a wonderful life." Jim will be laid to rest at Indiantown Gap National Cemetery. In lieu of flowers, the family requests that donations be made to the Central PA Friends of Jazz, 5721 Jonestown Rd, Harrisburg, PA 17112, or to The American Heart Association at heart.org.

Published by Patriot-News from Nov. 24 to Nov. 28, 2021.
MEMORIAL EVENTS
To offer your sympathy during this difficult time, you can now have memorial trees planted in a National Forest in memory of your loved one.
Funeral services provided by:
Jesse H. Geigle Funeral Home, Inc.
MAKE A DONATION
Please consider a donation as requested by the family.
MEMORIES & CONDOLENCES
Sponsored by Jesse H. Geigle Funeral Home, Inc..
22 Entries
We have fond memories of Jimmy when we were his neighbors from 1983 to 1986. Our thoughts and prayers are with his family and friends.
James and Carol Herr
January 17, 2022

A DEAR FRIEND AND COLLABORATOR ...A BEAUTIFUL HUMAN BEING...
DRED 'PERKY'SCOTT
Friend
December 2, 2021
Sue - We are sending our deepest sympathy for the loss of Jim. Such an amazing man, musician and boss. Always had a smile on his face and you felt blessed to be in his presence. Keep the memories close to your heart.
Sam and Karen (Mathias) Shallcross
Work
December 1, 2021
Dear Sue & family, I was saddened to see the passing of Jimmy. Working with him at L & I when you saw him or chatted with him you couldn´t help but walk away feeling better. He was such a kind and compassionate man. Play on Jimmy.
Kathy Durbec Page
Work
November 30, 2021
Sue, my sincere sympathy to you in the loss of Jim. We became very good friends in the years we worked together at BWC. Seeing his picture refreshed my memory of the night we spent with the Urlings at Hershey. Rest in peace Jim!!!!
LaDonna Shirk
Work
November 29, 2021
My heartfe!t sympathy to you Sue and to Jim's sons. So many years of friendship, laughter and music. I'm remembering with a smile and so very thankful.
Shellie Reitz
Friend
November 29, 2021
What talent and service. Deepest sympathies to all. Myra Werrin Sacks
Myra Sacks
November 28, 2021
I have fond memories of Mr Woods working with the staff at the Edgemont Community Center. He later worked with my Mother at L&I. Always willing to advise and guide. RIP Mr Woods
Kathy BurneyPoole
Friend
November 27, 2021
so many, long lasting, special memories...sending sympathy to you , Susan
Leslie Vogel
November 27, 2021
My heartfelt condolences to the family of Jimmy Woods. I worked with Jimmy at Labor and Industry for many years. When I think of Jimmy, I the of a gentleman. I enjoyed his musical talent my entire adult life. You will truly be missed by all. May God comfort your family and friends during this difficult time.
Keith D Mitchell
Friend
November 27, 2021
I was saddened to hear of Jim's passing. My deepest sympathy to Sue and the Wood family. Jim was my first boss at BWC and was instrumental in teaching me what it was to be a professional. I will miss his leadership & friendship.
John Veliky
November 26, 2021
My condolences to Sue and family on the loss of an interesting man and wonderful musician.
Joni Williamson
Other
November 26, 2021
Jimmy was the Organist for "John Brown Trio" & Sammy Banks was the Drummer. When they brought me on board it was called "The John Brown Trio Plus One". A lot of times Jimmy & me rode together. We always had great conversations and those guys looked after me & always treated me with great respect. We played for "The Annual NAACP Fundraiser Dinner" more than once. We played at the West Shore Country Club for Gov. Shapp´s Luncheon. If my memory serves me correctly Jimmy couldn´t make that gig bcuz he had to be at his state job, and the late Danny Sullivan (my Bro-n-law & former Organist) played with us. We also played for Williamsport´s first integrated High School Prom. I was quite shocked to learn if his passing. I offer my condolences to his family, friends, co-workers. He may be gone, but not forgotten.
Elder Dr. Carolyne "Carol" Sullivan
November 26, 2021
Jimmy Wood was an inspiration and musical mentor to me. I will miss the way his face lit up when our eyes made contact! Wishing his family sympathy and eternal rest for my friend Jimmy Wood!!
Joe Trojcak
Friend
November 26, 2021
What a wonderful man Jim was. Sue, I´m so sorry for your lost.
Sandra Ritter
November 26, 2021
Very sorry for the passing of Jimmy. He taught me some things about life and music. What a great man and pianist he was!
Scott D. Portzline
November 25, 2021
Sending love and prayers to Jimmie's family, I will always treasure our years working together at Labor and Industry and the one Christmas he performed at my Engineering Christmas Party. His talent was beyond magnificient, Marlene Bard Frawley
Marlene Bard Frawley
Work
November 25, 2021
To Jimmy's wife, children and family. I am so very sorry for your loss. I knew Jimmy from working at L & I. Always a gentlemen and very kind to all. May he rest in peace.
Nanci Wills
November 24, 2021
May your memories of the wonderful times you shared with your loved one comfort you and your family, today and always.
American Heart Association
November 24, 2021
My sincere condolences to the Wood family. I worked with Jimmy, he was a gentleman and a sweetheart. He will be missed.
Donna Martin
Work
November 24, 2021
My sincerest sympathy to Sue and family. So sorry for your loss. Jimmy was a dear friend and former co-worker that will be fondly remembered and missed.
Eunice Hansard
November 24, 2021
I will forever miss his friendship and his music. My sincere condolences to Sue and the rest of the family. RIP B.J.
Elaine Chavey
Friend
November 24, 2021
Showing 1 - 22 of 22 results