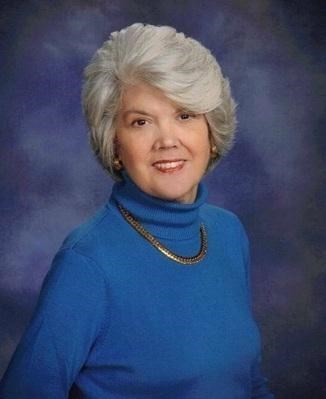 Elizabeth Harper Holsberry died peacefully in her sleep on Tuesday, October 20th, 2015. She was born to Addie Fisher Harper and Kervin Ethan Harper on November 22, 1944. She was predeceased by her parents, her son's father, Jack Moore, and her husband, John E. Holsberry. She is survived by her son, Alexander Duncan Moore; her sister and brother-in-law, Frances and Ray Fox; her step-sister Cordelia Fields and her husband Vernon; her niece, Polly Browder and nephews Link Browder(Mary Rose), George Fox, Jr(Alicia)., and Richard Fox(Mindy). She is also survived by her dear friend, whom she considered a son, Larry Knight and his wife Sharon, and their sons Ian, Chris, Joshua, Kyle and Eric.

Elizabeth's vocation and love was teaching; she taught at Pensacola School of Liberal Arts, Catholic High School, and was an adjunct professor at Pensacola State College. After she retired from teaching, she was a volunteer at Semmes and Sherwood Elementary Schools. She also loved helping others; for many years she volunteered at the Loaves and Fishes organization. She was a proud graduate

of the University of Mississippi and followed "Ole Miss" football avidly.

The family wishes to thank the staff of Our Lady of the Haven of Peace for all of the care and support they gave to Elizabeth during her time with them.

A memorial service will be held on Saturday, October 24th, at 10:30 AM at Christ Episcopal Church in Pensacola, followed by a reception in the Parish Hall.

In lieu of flowers, memorial contributions may be made to Christ Episcopal Church or to Manna Food Bank.


Published by the Pensacola News Journal from Oct. 22 to Oct. 24, 2015.
To plant trees in memory, please visit the Sympathy Store.
MEMORIAL EVENTS
To offer your sympathy during this difficult time, you can now have memorial trees planted in a National Forest in memory of your loved one.
Funeral services provided by:
Bayview Fisher-Pou Chapel
MAKE A DONATION
MEMORIES & CONDOLENCES
15 Entries
I speak for my family, when I say how much Elizabeth helped my father, Mr. Holston, teach English and other subjects at Pensacola Private School of Liberal Arts. RIP, you deserve it.
Wendy Holston Anderson
December 1, 2015
WHAT A FRIEND ELIZABETH WAS TO SO MANY..GOODNESS AND MERCY FOLLOWED HER ALL THE DAYS OF HER LIFE. OUR PHS CLASS OF '62 WILL MISS HER UNTIL WE MEET AGAIN..THANK YOU FOR THE GOOD TIMES, ELIZABETH.. I AM SO GLAD WE HAD THIS TIME TOGETHER..THE STARTS WILL BURN BRIGHTER BECAUSE OR YOUR RESIDENCE IN HEAVEN. LOVE WINS AGAIN...
REV. JAN JONES THACKERAY
November 3, 2015
I had the priviledge of attending school with Elizabeth at P. K. Yonge, Clubbs JHS, and PHS. She was always a very kind and gracious person. She will be missed by all.
art anderson
October 26, 2015
Or condolences to Liz' family. Known her for 60 years...she will be missed. The Trants
October 26, 2015
A true Southern Lady in all good respects. She graced all who knew her and we were blessed to know her. God's peace to her family. Doug and Kay Marsh
October 26, 2015
THINKING OF ALL THE FAMILY AT THIS TIME OF THE LOSS OF YOUR LOVED ONE. BEN & ANN WEST....
BEN WEST
October 23, 2015
I knew Elizabeth in high school, she was one of the most compassionate,and caring persons, I ever knew. She took compassion on my very shy self. Joannie Baston Mattoon
Joan Mattoon
October 22, 2015
I only knew Elizabeth while attending PHS. She was always very friendly and likable. I know that she will be missed by all.

Larry - you were her "rock" God Bless you! Another son indeed!
Connie S
October 22, 2015
My dearest Elizabeth, Friends forever from across the Park to PK Young. You made a wandering military kid your own. I miss you. Cele
Cele Quaintance
October 21, 2015
Showing 1 - 15 of 15 results