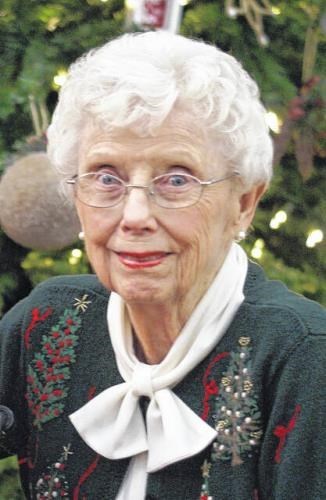 EASLEY — Carolyn Biggers Harvill died on Saturday, Oct. 23. She was the daughter of the late Laura Biggers Reeves and the late William P. Biggers, Sr. She was born on Sept. 9, 1925 in Decatur, Ga.

She enjoyed many years growing up there where she met her High School sweetheart, Gilbert Harvill. They were married during WWII. They lived in Decatur, then Tucker, Ga., and in 1972 moved to Gainesville, Ga., where they first lived on Lake Lanier and later in the City of Gainesville.

They belonged to the First Presbyterian Church in Gainesville where Carolyn was on staff for 10 years. In 2006 they moved to Easley, S.C., into the Foothills Retirement Community and enjoyed being members of Providence Presbyterian Church.

There will be a Memorial Service in Easley, with burial at Crestlawn Cemetery in Atlanta, Ga.

In lieu of flowers, please donate to your favorite charity.

Published by The Sentinel-Progress from Nov. 2 to Nov. 3, 2021.
To plant trees in memory, please visit the Sympathy Store.
MEMORIAL EVENTS
To offer your sympathy during this difficult time, you can now have memorial trees planted in a National Forest in memory of your loved one.
Funeral services provided by:
Robinson Powdersville Funeral Home
MAKE A DONATION
Please consider a donation as requested by the family.
MEMORIES & CONDOLENCES
2 Entries
We met Carolyn and Gilbert when we carried my parents (Tom (aka Willie) & Virgie Faris) to the 43 Bat SeaBee reunions. Oh, how we adored them and their mischief. I will miss her wonderful phone calls and emails that always closed with "luv". Now Gene Kelly has his dancing partner with him. Deepest sympathy, Beverly (or as I loved to hear her say 'BevUHly' ) & Bubba Almond,Chesterfield, VA.
Beverly Faris Almond
Friend
October 29, 2021
It was a pleasure and joy to know Carolyn at Foothills Community, Presbyterian Homes of SC. Her friendship was a treasure. To the family, I am so sorry for your lost of dear Carolyn. You are remembered in prayer.
Dot Elmore
Friend
October 26, 2021
Showing 1 - 2 of 2 results