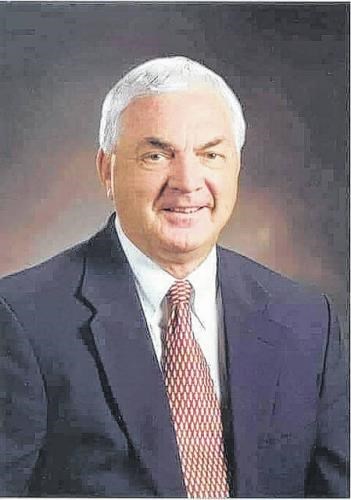 Born in Pickens County, a son of the late Ola Bruce Bagwell and the late Lillie Maude Owens Bagwell, Mr. Bagwell was a 1955 graduate of Easley High School where he excelled in football being both quarterback and lineman. He later received his Master's degree from Clemson University where he played baseball and participated in the College World Series two years in a row. His college baseball career lead him to play semi-pro ball for the Washington Senators in the Florida State League.

Mr. Bagwell coached football at Easley High School from 1967 to 1992 where he lead the Green Waves to two State Championships. Not only was he inducted to the Easley High School Hall of fame, he was also inducted into the South Carolina Coaches Hall of Fame. His coaching accomplishments and leadership lead him to receive many awards, and having a gym and ball field named in his honor.

Mr. Bagwell served as Councilman for the City of Easley for three decades and Mayor from 2008 to 2019. During his term, Mayor Bagwell worked closely with city council and city employees on revitalizing the downtown area, including the West End District and developing the Doodle Trail. In his last term, Mayor Bagwell was awarded the Order of the Palmetto for his service and leadership to Easley.

In addition to his parents, Mr. Bagwell was predeceased by two brothers, Bobby Bagwell and Charles Bagwell.

There will be no formal visitation. Mr. Bagwell did lie in state from 2-5 p.m. Sunday, September 19, 2021 at Robinson Funeral Home-Downtown.

In lieu of flowers, memorials may be made to Easley First United Methodist Church, P.O. Box 589, Easley, SC 29641.

Published by The Sentinel-Progress from Sep. 28 to Sep. 29, 2021.
To plant trees in memory, please visit the Sympathy Store.
MEMORIAL EVENTS
Sep
20
Service
1:00p.m.
Easley First United Methodist Church
115 W. First Avenue, Easley, SC
Funeral services provided by:
Robinson Downtown Funeral Home
MAKE A DONATION
MEMORIES & CONDOLENCES
26 Entries
God speed coach Bagwell. You taught me how to drive in Driver's Ed and led the Green Waves to success. I've driven all over the U.S. and you started it all buddy. Won't soon forget you. Keith Carlisle EHS Class of 1985.
Keith Carlisle
Teacher
October 7, 2021
Teri and family, so sorry to hear about Coach Bagwell's passing. I never saw him with a frown. I know he will be dearly missed. My deepest sympathies.
Michelle Robinson
Student
September 22, 2021
So sorry for your loss he was a great person. Enjoyed being around him and the whole family.
David Hickerson
Family Friend
September 22, 2021
Easley lost a true friend and leader RIP
Thomas McCabe
September 20, 2021
Very sad to learn of Larry passing. He was a good friend, and team mate and a very close friend. My thoughts and prayers go out to the family and his many friends. John Bracknell Greenwood
John Bracknell
Friend
September 20, 2021
A good coach, a good man, a family man, and a Clemson Tiger. I enjoyed our years of competing against each other. Larry was a gentleman and very smart. He will be missed by his family and friends.
Jack King
Friend
September 20, 2021
I played football under this wonderful man who loved not only me but each kid he taught. I found out as I was walking into the High School to be inducted into the Hall Of Fame! Still struggling because he was my coach and I have the upmost respect for this man/father! Please know my thoughts and prayers are with each of you during this most difficult time!
Eric Hatton
Student
September 20, 2021
I am so sorry to hear about Larry. He was such a sweet man and this breaks my heart. My prayers go out to all of you! Love you all very much Kristi Roper Hays
Kristi Roper Hays
Family
September 20, 2021
GREAT MAN--GREAT COACH
Roy Abercrombie
Friend
September 20, 2021
So sorry to hear about your grandfather. Praying for you all.
John Rankin
Friend
September 20, 2021
A great man. A terrible loss. I am so sorry about The Mayor.
Julie Capaldi
September 20, 2021
Our prayers are with you all. May God bless you and lift you up. Michael, Juanita, and Chris Garrett; Hanna and Carter Humphrey.
Michael Garrett
Family
September 17, 2021
So sorry to read about Larry's passing.....always liked him and he was a class act.....RIP
Syd McDaniel
September 17, 2021
Coach Rest In Peace till we meet again.
Terry Smith
Friend
September 17, 2021
Sad to hear of Larry's passing. I have known him for a long time and considered him a good friend. Prayers and peace to the Bagwell family
Ann Lyons
Family Friend
September 17, 2021
Praying for the family
Brenda Stephens
Neighbor
September 17, 2021
Lu, Lou Anne, Teri and Family. Saddened to hear about the passing of Coach Bagwell. He was very accomplished and will be missed for his leadership. I can still hear his voice at football practice about how we had to 'toughen up". My condolences.
Mark Looper
September 17, 2021
Mr. Bagwell was a wonderful mayor. It meant so much to me that he attended the dedication of the new Easley Bible Methodist Church when I was the pastor. May the Lord comfort his family at this time.
Terry D. Going
Acquaintance
September 19, 2021
Larry was a man that loved his lord loved his family and loved the city of Easley he will be missed by all.
Tommy Holcombe
Friend
September 19, 2021
Our Dearest condolences to the family Larry grew up with the Waldrop family we all loved him bless you all many prayers
Lisa Patterson
Friend
September 19, 2021
I am a better person for having known Larry since the early 1950s. He did a lot for Easley High and the city of Easley, quite a life for a simple man from Easley mill. You will be missed.
willie stansell
Friend
September 19, 2021
Our heart felt condolences from The Mr. And Mrs Donna and Larry Ballard, Seth Ballard and families
Donna Ballard
Family
September 18, 2021
Coach Bagwell was a great asset to the town of Easley as well as Easley High School. He will be missed. It was an honor to know him. Prayers for the family.
Frances Gambrell-Jones
Student
September 18, 2021
You were a good man, Coach Bagwell. May God bless your soul.
Dan (and Diane) Ellenburg
Student
September 18, 2021
He was a good mayor for Easley
Justin Burrell
Friend
September 18, 2021
Had the opportunity to play baseball with Larry at Easley High School. Although I was younger, he made sure I was an accepted member of the team. He was a great leader! Will be missed!
Robert Couch
Friend
September 17, 2021
Showing 1 - 26 of 26 results