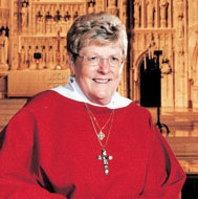 NORFOLK - The Rev. Anne C. Brower, M.D., age 75 at her death Oct. 29, 2013, brought passion and compassion to her venerable vocations: medicine and ministry.

For four decades Anne was an acclaimed medical educator who demanded excellence of herself and the many hundreds of American and foreign medical residents whom she trained at more than a dozen medical schools and various military venues.

The same rigor was evident in her roles as an Episcopal priest. For two years she was senior chaplain at Washington National Cathedral, where she assembled a roster of clergy volunteer chaplains to ensure that midday mass was provided throughout the week. She also reinvigorated and nurtured the cathedral's healing ministry, which involves prayer and the laying on of hands.

Before her time at the cathedral, she was for two years assistant priest at Old Donation Episcopal Church in Virginia Beach. Her most recent clerical post was as assisting priest at Norfolk's Christ and St. Luke's, where she was ordained in 2001 and where she was beloved for her provocative--and ever brief--sermons, her pastoral care and her devotion to the healing ministry.

A respected internal-medicine physician even before she specialized in radiology, Anne gained fame among skeletal radiologists, rheumatologists, emergency-room personnel, and medical-school professors in 1988 upon publication of Arthritis in Black and White. Her pioneering easy-to-use textbook and reference is treasured by medical personnel needing to interpret x-ray images of the many types of arthritis that occur in the human body. In 1998 the American Association of Women Radiologists bestowed upon her its Marie Curie Award citing her as the "Most Outstanding Woman Radiologist in the United States." She received the Smith College Medal in 2009; the award is presented to alumnae who "exemplify in their lives and work the true purpose of a liberal arts education."

Brisk demand for Anne as medical lecturer, panelist and instructor was the norm for a couple of decades in the Americas and Europe. The expanded third edition of Arthritis swiftly sold out when released last year. Her experience preparing herself for the priesthood led her to publish I Am Not Ready to Die Just Yet, a book of inspiring stories about ordinary people who lived with, through and beyond their diseases.

Born and reared in New Jersey, Anne graduated from Westfield public schools. Having earned a Bachelor of Science degree at Smith College, she applied for entry to three medical schools and was accepted by all three: Harvard, Yale, Columbia Presbyterian. She settled on the last because it was in New York City.

In 1999 she was appointed chair of the radiology department at Eastern Virginia Medical School. By then she had served on physician teams that attended five U. S. presidents (Nixon, Ford, Carter, Reagan, George H.W. Bush), and taught for a decade at the Uniformed Services University of the Health Sciences (the armed forces medical school) in Bethesda, Md.

She counted her years with the military among the most satisfying of her career. She delighted in the spirited teamwork of the medical staff. As a priest she sought successfully to deliver the Armed Forces Day message from the pulpit.

A breast-cancer survivor herself, Anne spoke as a volunteer before thousands of women about the necessity of mammograms to detect the disease early. This spring Anne was diagnosed with lung cancer. An especially aggressive cancer, as it turned out. The day after Labor Day, a Sloan Kettering lung-cancer specialist told her she had four weeks to live.

With that unhappy prophecy, Anne set about ensuring that her financial and legal affairs would be in order before her demise. Family members and close friends came to Norfolk to say their goodbyes. Because she was swiftly weakening, the number and length of visits was necessarily sharply limited.

At the start of the Sept. 22 main Sunday service at Christ and St. Luke's, Anne, speaking from her wheelchair, delivered a short farewell to the congregation. She assured the worshipers that she was not angry at God, that she did not ask, "Why me?" "I am at peace,"she said. The congregation responded with a standing ovation.

The Rev. Canon Win Lewis will lead a celebration of Anne's life at 11 a.m., Sat. Nov. 9 at Christ and St. Luke's Episcopal Church.

Anne wished that, instead of flowers for the memorial service, donations in her memory be directed to Christ and St. Luke's Episcopal Church, designated for either the Restoration Fund or Adult Education, 560 W. Olney Road, Norfolk, VA 23507 or to the Graduate Medical Education Program at Eastern Virginia Medical School, P.O. Box 1980, Norfolk, VA 23501.

Also at Anne's request, her remains were cremated and her son will spread her ashes on Elephant Head, a prominent feature of the Santa Rita Mountains near Tubac, AZ, where she intended to continue working in her chosen vocations. H.D. Oliver Funeral Apts. Norfolk Chapel is handling arrangements and online condolences may be offered to the family at hdoliver.com
To plant trees in memory, please visit our Sympathy Store.
Published by The Virginian-Pilot on Nov. 3, 2013.
MEMORIAL EVENTS
Nov
9
Celebration of Life
11:00a.m.
Christ and St. Luke's Episcopal Church
, VA
Funeral services provided by:
H.D. Oliver Funeral Apartments
MAKE A DONATION
MEMORIES & CONDOLENCES
9 Entries
Have just learned of Anne's death, to my great sorrow. She and my sister Betsy Peck were close friends at Smith, and I last saw Anne briefly at a Smith reunion a couple of years back. My parents adored her, as did Betsy and I. This brings much love to her family,
Anne Carter (Peck) Zadig

d aaaaaaaaaaaaaaa
Anne Carter Zadig
November 27, 2013
J
November 9, 2013
Dear Glenn,
It had been truly a pleasure having you and Anne in our lives. Our hearts, thoughts and prayers are with you.
Tara and crew.
November 8, 2013
My heart hurts that I cannot be at the celebration of life memorial for Dr Anne Brower. I planned to be with her the last weekend of August but she wasn't feeling up to it so plans were canceled. She was such a good woman and I loved her dearly.
Glenn, I remember a moment you and she shared when we were at dinner at the Pink House in Savannah, you held her so tenderly as she placed her head on your chest. I almost felt as if I were intruding on such a tender moment between husband and wife, and I turned away as tears filled my eyes. She loved you, Glenn, she loved her children and her grandchildren and spoke of of them often. She was so proud of all of you. She stayed at my house one spring while she was teaching our residents and students and we often sat out on the sun porch after an incredible dinner, talking about our lives, our children, and our families. I treasure those times especially when she wasn't "Dr Anne Brower, nationally known radiologist" but Anne Brower, one of the dearest friends I had the good fortune to know.
Your work is done on this earth. I'm sure the first words you heard as you entered those gates of Heaven was "Well done, good and faithful servant".
I will love you forever. I will miss you for always. Miriam
Miriam Lariscy
November 8, 2013
Selfless and inspirational, the world was a better place for her presence and her passing leaves a void that cannot be replaced.
Larry Maddry
November 7, 2013
Dear Glenn, we share your grief. We loved Anne and will miss her greatly.
Mark & Julia Gordon
November 6, 2013
Glenn, Nate & I were so saddened to hear of Anne's passing. Mere words can never say enough at times like these. Please know you're thought of at this sad time. Love, Leslie and Nate Bayer
November 3, 2013
Dear Glenn and extended family,

I extend to you my deepest sympathy in your loss. May God be with you and grant you peace and comfort as you grieve.
Bob Powell
November 3, 2013
Dear Glenn, Lynne, Jim- Anne's light and love will remain with me. She mentored me at Old Donation as a Stephen Ministter and as a woman of the church staff. She always had time for me- whether at the Cathedral, or In Norfolk, or at Old Donation. She helped me realize a calling to be with those sick or in distress. Most of all she showed me Her and God's love and light- everlasting. Thank you.
Diane Miller
November 1, 2013
Showing 1 - 9 of 9 results