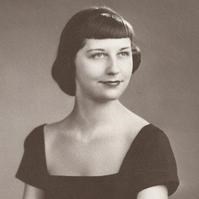 She was the daughter of the late Mildred Albaugh and Hugh Arthur Kerwin of Washington. She was the granddaughter of Hugh Leo Kerwin, Director of the Conciliation Service of the US Department of Labor from its founding in 1917 to his death in 1937. She is a descendant of the Tilghman and Hynson families of the Eastern Shore of Maryland.

She attended The Gunston School in Centerville, Md., and graduated from Fairfax Hall in Waynesboro, Va.

She married Clyde Vernon March Jr. in 1956 at Christ Church Georgetown in Washington, and traveled far and wide with him as a proud U.S. Air Force wife, quickly making lovely homes and friends along the way. They settled in Virginia Beach in 1972.

Mrs. March was active in the Thoroughgood Civic League, a long-time member of the Thoroughgood Garden Club, the Suburban Woman's Club, and the Sentara Virginia Beach General Hospital Auxiliary, and served them in many official capacities over the years. She was an exquisite hostess, and a grand organizer and worker for various volunteer projects.

The project dearest to her heart began as a young girl, when Gail's mother taught her knitting and other needlework in support of the American Red Cross WW II effort. She continued her support of active duty military families with the Navy-Marine Corps Relief Society and was honored in 2012 by the Society's Volunteer of the Year Award for her 8,000 hours of service, and 240 knitted items for the NMCRS Layette program. At every posting, Gail helped forge lasting friendships with many volunteers, and was very proud of the important work they accomplished.

Gail is survived by her husband of 58 years, her son Clyde Vernon March, III (Tripp), her daughter, Lynne Redgrave March Baptista and husband, Skip; her grandson, Andrew Bennett Baptista; her granddaughter, Katherine Hynson Baptista, all of Alexandria, Va., as well as many nieces, nephews, relatives and friends. She will be sorely missed.

Interment will be held at a later date at the Arlington National Cemetery. Condolences may be registered at www.rwbakerfh.com.
To plant trees in memory, please visit our Sympathy Store.
Published by The Virginian-Pilot on Jan. 1, 2014.
MEMORIAL EVENTS
Jan
3
Funeral service
1:30p.m.
Old Donation Episcopal Church
4449 N. Witchduck Road, Virginia Beach, VA
Funeral services provided by:
R.W. Baker Funeral & Co.
MAKE A DONATION
MEMORIES & CONDOLENCES
1 Entry
Dear Tripp and Lynne, I am so sorry to hear about the passing of your wonderful mother. My thoughts and prayers are with you and your families. Sincerely, Joanie Marlow Needham
January 2, 2014
Showing 1 - 1 of 1 results