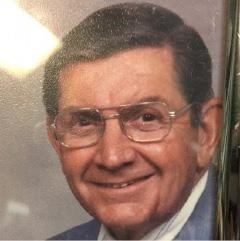 Johnny graduated from Norfolk Academy in 1951 and later attended Virginia Tech. He served in the Army Combat Engineers. Johnny joined his father in the lumber business and served as President of the John E. Wool Lumber Company. He later joined the Newman family at Greenwich Supply Corporation until his retirement. Johnny served as a director in the Virginia Building Material Association and was a member of the Norfolk Chapter of the Sons of the American Revolution. Johnny and Evelyn were very active in the community and their church Old Donation Episcopal Church. A private burial will be in the family plot at Forest Lawn Cemetery. A memorial service will be held on Friday, November 11, 11:30am at Old Donation Episcopal Church 4449 N. Witchduck Rd, Va. Beach 23455, with a reception to follow.

In lieu of flowers donations can be made to the church or a charity of your choice.

To plant trees in memory, please visit our Sympathy Store.
Published by The Virginian-Pilot on Nov. 9, 2016.
MEMORIAL EVENTS
Nov
11
Memorial service
11:30a.m.
Old Donation Episcopal Church
4449 N. Witchduck Rd, Va. Beach , VA
MAKE A DONATION
Please consider a donation as requested by the family.
MEMORIES & CONDOLENCES
Sponsored by the family.
1 Entry
To Johnny's family - I will always remember him as a kind man with a big heart. May the fun memories you have of Johnny help you through this sad time.
Shelley Stiles
November 9, 2016
Showing 1 - 1 of 1 results