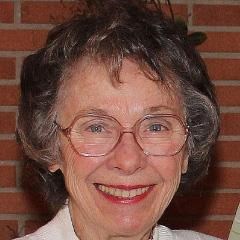 She was born in Boston, Massachusetts, the only child of her deceased parents, Dr. and Mrs. John E. Kelley of Cambridge, Massachusetts and Miami, Florida. Joyce is survived by her devoted husband of 62 years, CDR USN(Ret.), John M. "Jack " Barry of Virginia Beach, VA. She graduated Cambridge High & Latin School in Cambridge, Massachusetts and attended Northeastern University in Boston, Massachusetts, where she met her husband, Jack. Jack was designated a Naval Aviator, and in 1955 they married. Together, Joyce and Jack enjoyed thirty years of travel to naval assignments which included Panama, Bermuda and various U.S. Navy commands as well as a temporary duty which allowed a visit in England. As a Navy wife, Joyce made "home" for their family at US Naval Air Station, Coco Solo, Panama Canal Zone; US Naval Air Station, Bermuda; US Naval Air Training Command, Pensacola, FL; US Naval Air Station, Patuxent River, MD; U.S. Marine Corps Schools, Quantico, VA; US Naval Training Air Command, Corpus Christi, TX and at their "retirement" home in Virginia Beach, VA.

Joyce and Jack enjoyed retirement by traveling and seeing the natural beauty of many of the National Parks. They participated in Elderhostel Active Programs throughout our country on the rivers and in the mountains. Visiting the western states became most prominent in their travels. Photography was her passion and photographing nature and animals was paramount. She recently had begun the wood-carving of wildfowl. From early childhood Joyce had a keen interest in target shooting and became expert in pistol and skeet. She was an avid genealogist, researching and documenting both sides of their families from the 1600s to the present day and she enjoyed sharing it with many family members. Joyce was an animal lover, and while in Texas she acquired two West Highland White Terriers. She showed them on the AKC circuit and won many ribbons and show honors. Joyce enjoyed life to the fullest with her loving husband and their three children's families with five loving grandsons and, as she would say, their "favorite" granddaughter.

As a member for over 50 years of the Thoroughgood Garden Club in Virginia Beach, Joyce had served as President, Treasurer and Photographer. She also served as Treasurer and Photographer for the Council of Garden Clubs, Virginia Beach, The Suburban Womans' Club and the Hermitage Garden Club. For over ten years, Joyce enjoyed being a photographer for activities at Old Donation Episcopal Church. Her favorite time was taking active photos at the children's Vacation Bible School each year.

The family will receive friends at Hollomon-Brown Funeral Home, Bayside Chapel on Thursday, March 9, 2017, from 7 to 9 p.m. The funeral will be held at 1 p.m. Friday, March 10, 2017, at Old Donation Episcopal Church. Interment will be in Princess Anne Memorial Park. In lieu of flowers, donations may be made to the Building Fund, Old Donation Episcopal Church, 4449 N. Witchduck Road, Virginia Beach, VA. Condolences may be offered to the family at www.hollomon-brown.com

To plant trees in memory, please visit our Sympathy Store.
Published by The Virginian-Pilot on Mar. 9, 2017.
MEMORIAL EVENTS
Mar
9
Visitation
7:00p.m. - 9:00p.m.
Hollomon-Brown Funeral Homes - Bayside Chapel
1457 Independence Blvd , Virginia Beach, VA
Mar
10
Funeral
1:00p.m.
Old Donation Episcopal Church
, VA
Funeral services provided by:
Hollomon-Brown Funeral Homes - Bayside Chapel
MAKE A DONATION
MEMORIES & CONDOLENCES
Sponsored by the family.
7 Entries
John & family,
I did not know Joyce but I was hoping to share some words of comfort. It's never easy to lose someone you love. God promises us that we will see our loved ones again in the very near future. Take comfort in knowing that you will see Joyce again as well. Until then may your hearts be filled with the wonderful memories of joyful times spent together as you celebrate a life well lived.
margot w
Friend
March 11, 2017
Dear Jack and family, we are so sad to hear of Joyce's passing. Bill and I have wonderful memories being with Joyce and Jack over the years. She will be missed by many. Our deepest sympathy to the family. Nancy and Bill McAllister.
Nancy and Bill McAllister
March 9, 2017
Alan and I were so sad to hear of Joyce's passing. Our Deepest Sympathy to Jack and Family.
Dawn Martell
March 9, 2017
Jack, We are with you and the kids today in our thoughts and prayers. Your friends to the end.
Love ya.....Dick and Gail
Richard Beck
March 9, 2017
To the Barry Family... I am sorry to hear about Joyce.. our hearts and prayers go out to you and your family at this difficult time.

Our sincerest condolences,
Rosan, Justin and Logan Keenan
Rosan Keenan
March 9, 2017
Dear Jack, and entire Barry family,
We are so deeply sorry for your loss, and will always remember Joyce with great admiration and fondness, and also for the multitude of wonderful qualities that she possessed. She was truly a 'Grand Lady' and these are but a few of those qualities that first come to mind: her great zest for life, her fabulous laugh, her nonstop interest in others, the way she loved her family totally and unconditionally, and most of all for the wonderful friend that she was to our entire family, and especially to our mother, Anne Olson. They are certainly together again now, and watching over all of us, from above. May your own loving memories sustain all of you at this difficult time. You are very much in our thoughts and prayers. Sue & Jerry Cox, and the entire Olson family
Susan Cox
March 8, 2017
I am sorry for your loss. May prayer comfort you.