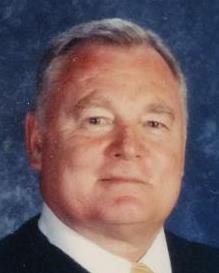 Bob was a 1967 graduate of Churchland High School where he was active in many sports, most notably football. He was a volunteer for the draft and served in the US Army in Vietnam before graduating from Emporia State University in 1975. After college, he joined the Virginia Beach Police Department from which he retired in 1999. An active participant in his community, he was a 4-H Program volunteer, former President of the Lago Mar Civic League, member of Nimmo United Methodist Church, and awarded the Bronze Star while serving in the Virginia Army National Guard. After retirement, he spent his time as a substitute teacher for Virginia Beach Public Schools and a security officer at Chesapeake Regional Medical Center and Children's Hospital of the King's Daughters.

A graveside service will be held 11:00AM Saturday, March 6th at Nimmo United Methodist Church Cemetery. Online condolences may be offered to the family at hdoliver.com.

Published by The Virginian-Pilot on Feb. 28, 2021.
To plant trees in memory, please visit the Sympathy Store.
MEMORIAL EVENTS
Mar
6
Graveside service
11:00a.m.
Nimmo United Methodist Church Cemetery
VA
MAKE A DONATION
MEMORIES & CONDOLENCES
Sponsored by the family.
2 Entries
I'm am so sorry to hear of the loss of Bob. We were in the same academy class in 1976. A real gentleman and class act. He always has a smile when we ran into each other and had a kind word. Heaven got a good one!
John Bell
Coworker
February 26, 2021
Bob was one of the fines men I have ever known. This world is worse without him.
Ray Bousman
Coworker
February 24, 2021
Showing 1 - 2 of 2 results