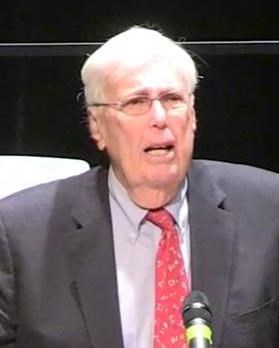 Bill graduated from the College of William and Mary with his Masters in Education from Rutgers University. Bill began a long career in education and historical museums: Colonial Williamsburg as Director of Special Educational Projects; Headmaster of Charlotte Country Day School; Headmaster of the Derryfield School; Associate Director of Sleepy Hollow Restorations (now known as Historic Hudson Valley); President of Webb School of Knoxville; Director of Special Projects at Colonial Williamsburg.

In retirement, Bill joined the board of directors at the Dare Education Foundation Inc and served as Chairman. He loved volunteering at Kitty Hawk Elementary where he was known as Mr. Bill. In his honor Mr. Bill's Reading Room was established.

He will be remembered for being an avid reader, spending time along the ocean with family, the lifelong friendships he formed, and most notably his love for all people. He had a way of finding the best in everyone he met and making a difference in their life, whether big or small.

The family is planning a memorial service to be held in Williamsburg, Virginia at a later date. Donations in his memory can be made to Dare Education Foundation: PO Box 959 Kitty Hawk, NC 27949 or The Bailey Milne Fund c/o Derryfield School: 2108 River Rd, Manchester NH 03104.

For online condolences, please visit www.doanebealameshyannis.com .
Published by The Virginian-Pilot on Feb. 8, 2021.
To plant trees in memory, please visit the Sympathy Store.
MEMORIAL EVENTS
To offer your sympathy during this difficult time, you can now have memorial trees planted in a National Forest in memory of your loved one.
Funeral services provided by:
Doane Beal & Ames
MAKE A DONATION
MEMORIES & CONDOLENCES
Sponsored by the family.
9 Entries
During the early '60's I was a student at Florence M Gardineer Middle School in Springfield NJ. Mr Pfeifer was both my History teacher and my summer school teacher in a special summer school project he ran with 3 other teachers for 2 years. I am 72 years old now and I have never forgotten him. It is a blessing that he had such a positive influence on so many children.
Sherry Hurwitz
Student
February 9, 2021
I worked with Bill in the late 1990s at Colonial Williamsburg. He and I were the two senior directors in the Historic Area and collaborated every day. Working with Bill was a highlight in my career. He was a true professional, but he was always so much fun too. We had a lot of challenges, but what I remember most is the laughter. And that he always had the coffee on when we met early in the morning. He was a true gentleman. Please accept my deepest sympathies...I know what a loss this must be for his family.
Pam Pettengell
Coworker
February 9, 2021
My junior high school experience in Mr. Pfeiffer's social studies class is still with me and so many of his former students 60 years later. He seemed so comfortable in his role, so experienced that I marvel now that he must have been in his early 20's, fresh out of William and Mary College at the time. His classes were challenging and fun, with mutual respect at the center of the classroom culture he created. I am one of many who will always remember him with great fondness.
Pam Blafer Goldman
Student
February 9, 2021
It was impossible to be in the same room with Mr. Pfeifer and not have a smile on your face. Maybe it was his decades as an educator, but when you spent time with him, you always knew more when you left than when you came: more about how to think, how to laugh, how to tell stories and jokes, how to make a proper martini (if there's a bottle of vermouth on the property, it's a martini...). So many people across generations will carry Mr. P in our hearts in the years and decades to come.
Nate Rawlings
Family
February 8, 2021
We miss having coffee mornings with Bill at Heatherwood at Kings Way. Though he was in his wheelchair, Bill was always upbeat, ready to share conversation about the day's activities and the news. He loved his family, and was always talking about them, particularly about his son and the Hyannis Harborhawks. WE miss him greatly.
Rita and Jerry Winer
Friend
February 8, 2021
As a boy I was a student of Mr. Pfeifer's ... so very lucky to have experienced his warmth, brilliance at his calling, and caring as a human being. I was extremely lucky to have done so.
Rick Gruen
Student
February 7, 2021
Mr. Pfeiffer was my social studies teacher when I was in junior high school at Florence Gaudineer school in Springfield, N.J. In the early 1960’s. He was a talented teacher, although probably this was the very beginning of his career, and that is why he is so memorable to me 60 years later. I learned some valuable life lessons from him in addition to social studies. May his memory be a blessing.
Janie Van Horn
Student
February 7, 2021
Great memories as a student of a wonderful middle school social studies teacher at Florence M. Gaudineer School in Springfield, NJ 1960-1962. Thankful to see he had such a long and fruitful life. Very surprised to see he was once headmaster at Charlotte Country Day School where my daughter and her husband now teach. Many sharing such positive thoughts of him on Facebook group "All about Springfield, NJ Past and Present". Sincere condolences to his family. I smile to think of all the wonderful stories the family must have to remember him by.
Cheryl Boyle Rolph
Student
February 7, 2021
We wish to extend our deepest sympathies at this difficult time.
The Staff of Doane Beal & Ames Funeral Home
February 8, 2021
Showing 1 - 9 of 9 results