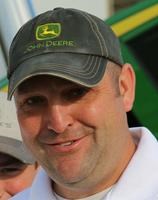 Sam & Jack DuDash
November 18, 2017
Jay, in the few short years that you called upon our store, your honesty, integrity, sense of humor, and willingness to help us and our customers was second to none. The times we spent at field demos sharing farm and tractor pull tales will always stand out in our memories. Thank you for those times, we will miss you very much.
Roger Spires
November 18, 2017
Duane, Brad, Jill and family; so very sorry to learn of your loss! Memories, memories, and memories. May GOD soften the "sting" knowing that Jay's smile, laughter, and personality influenced so many. It will be cherished forever!
MERLIN KIESEWETTER
November 18, 2017
Thoughts and prayers to the Haning family. Jay was a very remarkable man. He was thought very highly by his friends. Jay, you will be truly missed.
Brook Schafer
November 17, 2017
Showing 1 - 8 of 8 results