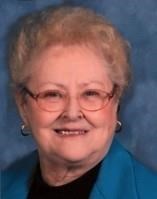 ABOUT
Peoria High School
FUNERAL HOME
Mason-White Funeral Home
20 Valley Forge Rd
Washington, IL
Lora Esch
WASHINGTON - Lora Sever Esch, formerly of Washington, passed away on Wednesday, January 20, 2021, in Melbourne, Arkansas, after a month-long illness.
Born in Canton, IL, on December 29, 1932, to Harold and Ethel (Helms) Sever, she moved a number of times with her parents, finally settling in Peoria, IL, where her father went to work for Caterpillar Tractor Co. Lora graduated from Peoria High School in 1950. She married Vernon Esch on July 30, 1950, in Peoria, IL. They have been married for 70 years. They lived in Washington, IL, after they were first married.
Lora first worked for Travelers Insurance Company in Peoria, but after the birth of their second child, she and Vernon moved their family to Miami, Florida, in 1957. While Vern went to work selling insurance, Lora went to nursing school and obtained her LPN license. As Vern was transferred around Florida, she would always find work at various hospitals. Her last nursing position in Florida was at Tampa General.
They next moved their family, now numbering six kids, to the state of Vermont, where she went to work at the Burlington Vermont Hospital. They returned to Washington, IL, in 1969, and lived in the home where Vern had grown up. Upon returning home, she went to work for various Peoria hospitals and obtained her RN from Illinois Central College. She retired from the Peoria County Health Department in 1990, after working as a home health nurse, and then later working in the Health department clinic in Peoria.
Vern and Lora began showing and raising Collies during the 1970s and 1980s. They both enjoyed going to dog shows together and made many good friends there. In 1990, Vern and Lora began their own business called Verlor's Studio. She would mark and layout the wooden pictures, so Vern would cut them out and finish them. This was an art form called Intarsia. Over the next ten years, they traveled to various art shows, making many new friends and memories. Together they created about one thousand Intarsia art pieces.
They moved to Mountain Home, Arkansas, in the summer of 2000, after celebrating their 50th wedding anniversary. During these years, they traveled to many states, as well as other countries. They enjoyed their time in the Mountain Home area. Lora was a member of Redeemer Lutheran Church in Mountain Home, Arkansas, and a previous member of St Mark's Lutheran Church in Washington, IL. Lora started a parish nurse program while she was at St Mark's. Vern created a wooden picture of Jesus that hangs in the parish hall at St Mark's.
Lora was preceded in death by an infant brother, her parents and a daughter-in-law, Tess.
She is survived by her husband, Vernon; sister-in-law, Lucille Dyer; and her six children, Debbie (Doug Crist) Werner, Michael (Beth) Esch, Vicki (Jeff) Grewe, Jim (Irene) Esch, Tom (Rina) Esch and Susan (Ty) Rynearson; along with 15 grandchildren and three great-grandchildren.
Funeral services will be at 11 a.m. Friday, January 29, 2021, at Mason-White Funeral Home in Washington. Pastor Steve Pichaske will officiate. The family will receive friends from 10 a.m. until the time of service. Burial will be at Glendale Cemetery in Washington. Masks and social distancing will be encouraged and a limit of 50 people will be allowed to enter the building at a time.
Memorials may be made to St. Mark's Lutheran Church, 200 S. Main St., Washington, IL 61571. To share a memory or send a condolence for her family, visit wwwmasonfuneralhomes.com.
Published by Peoria Journal Star from Jan. 23 to Jan. 25, 2021.
To plant trees in memory, please visit the Sympathy Store.
MEMORIAL EVENTS
Jan
29
Visitation
10:00a.m. - 11:00a.m.
Mason-White Funeral Home
20 Valley Forge Road, Washington, IL
Jan
29
Funeral service
11:00a.m.
Mason-White Funeral Home
20 Valley Forge Road, Washington, IL
Funeral services provided by:
Mason-White Funeral Home
MAKE A DONATION
MEMORIES & CONDOLENCES
Sponsored by Mason-White Funeral Home.
0 Entries
Be the first to post a memory or condolences.