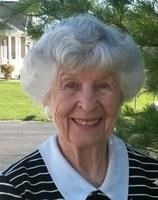 BORN
1928
DIED
2020
ABOUT
Peoria High School
FUNERAL HOME
Davison-Fulton Woodland Chapel
2021 North University Street
Peoria, IL
Martha "Martie" Elizabeth Kuhn
PEORIA - Martha "Martie" Elizabeth Kuhn, 92, formerly of Peoria, passed away on Sunday, December 27, 2020, at Good Samaritan Healthcare in Pontiac.
Due to COVID-19 restrictions, a family-only funeral service will be held at Davison-Fulton Woodland Chapel in Peoria, IL, on Saturday, January 2, 2021, with Pastor Jack Thompson officiating. Burial will be held at Lutheran Cemetery in Peoria.
Memorial contributions can be made to First Lutheran Church or Livingston County Community Pantry in Pontiac or Northwoods Community Church in Peoria.
Martie was born on September 18, 1928, in Crofton, Kentucky, to Roy and Virgie (Williams) Davis. She married Robert C. Kuhn on May 1, 1949, at Westminster Presbyterian Church in Peoria. After enjoying more than 42 happy years together, her loving husband, Bob, passed away on September 28, 1991.
She is survived by two daughters, Christie (Kurt) Lauritzen of Pontiac and Cindy Spangler of Peoria; and three grandchildren, Kari Lauritzen (James Weaver) of Los Angeles, Michael (Misty) Norris of Quincy and Kim (Casie) Vogelsang of Normal. Also surviving are nine great-grandchildren, Cora, Sloan and Alexa Vogelsang, Brennan Hills, Bryleigh and Kaeson Courtney, Alba and Edyn Norris and McKewin Weaver. She is also survived by three loving nieces, Peggy, Joni and Mary Beth; and two special nephews, Roy and John.
She was preceded in death by her parents; her two older brothers, George and Gene Davis; a granddaughter, Krista Elizabeth Norris; nephews, Bob and Bill Blundell; and her beloved nephew, Donnie.
Martie spent her early childhood in Kentucky before moving to Chicago and finally settling in Peoria. She trained at Caterpillar while attending Peoria High School, where she continued employment after graduation. She became a homemaker while her daughters were growing up, and then held various jobs outside the home until the age of 81, when she was diagnosed with Alzheimer's. As avid boaters, she and Bob spent many happy summers at the IVY Club and traveling on the Illinois River. Martie was a devoted mother and grandmother, one who was always willing to help those in need. Her positive attitude, fun personality, friendliness and loving ways will be greatly missed by many.
A special thank you goes out to the kind-hearted staffs at both Snyder Village and Good Samaritan who took care of Martie with love, compassion and dignity.
Online condolences may be made at www.davison-fulton.com.
Published by Peoria Journal Star from Dec. 28 to Dec. 30, 2020.
To plant trees in memory, please visit the Sympathy Store.
MEMORIAL EVENTS
Jan
2
Funeral service
Davison-Fulton Woodland Chapel
2021 North University Street, Peoria, IL
Funeral services provided by:
Davison-Fulton Woodland Chapel
MAKE A DONATION
MEMORIES & CONDOLENCES
Sponsored by Davison-Fulton Woodland Chapel.
2 Entries
Deepest sympathy Christie & Cindy. Have so many great memories of your mom at SVAL. Always enjoyed interacting with her & both of you. Mom always enjoyed doing her hair & hearing stories about her grandchildren. You will be in our thoughts & prayers.
Shona Sutton
December 31, 2020
I am so sorry for your loss Cindy and Mary Beth. Marti was a such a vibrant woman. Her and Betty Ann were a joy to be around because they were so outgoing and fun to be with. I remember going out on their boat for a cruise. Both of you were there as well, and I remember how relaxing and fun it was. I hope your many years of loving memories of her gives you comfort as your mourn your loss. May she rest in peace.
Kaye Walsh
Acquaintance
December 30, 2020
Showing 1 - 2 of 2 results