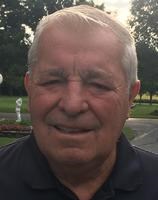 BORN
1941
DIED
2020
ABOUT
Olympia High School
Merlin Albert Kiesewetter
CREVE COEUR - Merlin Albert Kiesewetter, 79, of Creve Coeur, IL passed away on November 8, 2020 in Wellington, Florida.
Merlin was born on October 12, 1941 in Peoria, IL, the son of Albert and Zona (McFarlin) Kiesewetter. Merlin married Carrie (Kirk) on December 29, 1972 in Peoria, IL.
Merlin is survived by his wife of 47 years and by his 3 children: Col. Glenn (Stephanie) Kiesewetter of Willard, MO; Heidi (Chris) Haught of St. Petersburg, FL; Kassie (Ryan) Miller of Wellington, FL; 6 grandchildren; 1 great-granddaughter; 3 brothers: Marvin (Carol) Kiesewetter, Marion (Mary) Kiesewetter, Martin (Connie) Kiesewetter. Merlin was preceded in death by his parents and 1 brother, Myron Kiesewetter.
Merlin graduated from Low Point Washburn High School in 1959, continuing on to Illinois State University, earning a bachelor's degree in 1963 and a masters degree in 1968, in psychology and guidance. Upon graduation, he started his career in education in East Peoria Elementary Schools, soon becoming a school guidance counselor and coach at Central Junior High. In the midst of his time as an educator, he prided himself in community involvement. He served as Mayor of Creve Coeur from 1981 - 1985 and spent 8 years as a Groveland Township Trustee. He then served as Dean of Students at Olympia High School, eventually becoming an Administrative Assistant until his "retirement" in 1994. His passion for working with youth, however, brought him out of retirement and led him to become the director of Tazewell County Regional Safe School in 1997 where he worked with at risk students for 10 more years. Merlin wasn't just an educator, he was a difference maker. A voice that demanded attention yet brought a smile with his compassionate heart. He didn't just teach kids - he changed them. He believed that you didn't talk at them, but had to work WITH them- he would farm with them, build with them, talk with them. He was well known for his motto - (the three R's) Respect, Responsibility, Repeat.
Merlin lived a full and rich life. He loved his family so well, and so beautifully. They truly could not have asked for a better husband, father, or grandfather, who was always present, always there to laugh and share in the moments and make the memories. He was the spunkiest guy around! He loved to maintain his farm, and take care of his cattle, spending time outdoors working was a great joy of his. When he wasn't outside, however, you would've found him in the auction barn yodeling his auction cry! Merlin owned Kiesewetter Auction Services for 35 years, another passion of his. He was honored to be invited as the head auctioneer for The Peoria Crime Stoppers Auction for several years.
Merlin loved the Lord and held both of his church families dear to his heart. He attended Christ Bible Church in Creve Coeur and during the winter, Connect Church of Royal Palm Beach, FL. Under the passionate biblical teachings of these ministers, his walk with the Lord continued to grow.
This man of many talents, not only loved his family fiercely, but also his country, the military, and Jesus.
Visitation will be held from 4:00 PM to 7:00 PM on Tuesday, November 17 at Remmert Funeral Home. (CDC guidelines will be applied). A private (family only) memorial service will be held at Christ Bible Church, Wednesday, November 18 at 10 AM. If you would like to view this service virtually, go to Remmert Funeral Home Facebook Page and watch the live feed at the designated time. You are welcomed to join us for his graveside service at Fondulac Cemetery, East Peoria.
In memory of Merlin, donations can be made to Pekin Teen Challenge 2400 N. 8th Street Pekin, IL 61554 or Samaritan's Purse https://www.samaritanspurse.org/
Remmert Funeral Home is in charge of arrangements.
Published by Peoria Journal Star from Nov. 13 to Nov. 15, 2020.
To plant trees in memory, please visit the Sympathy Store.
MEMORIAL EVENTS
Nov
17
Visitation
4:00p.m. - 7:00p.m.
Remmert Funeral Home
IL
Nov
18
Memorial service
10:00a.m.
Christ Bible Church
IL
MAKE A DONATION
MEMORIES & CONDOLENCES
9 Entries
Carrie, we are so sorry for your loss. Enjoyed our times we had together and may God comfort you and your family. Sending prayers and Love
Sue & Dick “ Digger” Clemons
Friend
November 18, 2020
He was a nice man and I remember his wife when she was still Ms. Kirk my teacher in 8th grade. My condolences to your family.
David Wilson
Student
November 16, 2020
Our most Sincere Sympathy for your loss... He was a friend to us, but will be remembered for his patience with my parents, Bill and Maxine. Our prayers are with you....
Karen and Don Peterson
Family
November 16, 2020
Merlin was a great auctioneer.. He was wonderful to other people and I am saddened by his early passing. Dick Williams
Dick Williams
Friend
November 16, 2020
Sending some Love and thoughts from the Craig Campbell family
(Campbell’s Tree Service)
Jeremiah
Friend
November 15, 2020
Carrie, So sorry to hear about Merlin. I knew Merlin from him and you attending and volunteering at our Pekin AMBUCS dinners and Annual Charity Auctions. You were also my 7th grade teacher at CJHS. When we go through shadows in our life, just remember where there is a shadow, there is a light. Praying that Jesus will comfort you during this time. Psalm 9:9-10
Ron Harlan
November 15, 2020
Carrie, I am thinking of you at this sad time for you and your children. Merlin was always a person with a smile on his face when I would see him in the halls at Central Junior High. I am sending you my thoughts and prayers.
Pat Markum
November 14, 2020
They broke the mold when they made this guy!
His love for Christ, Family and Community was like no other.
To say he will be missed is an understatement.
Blessings to his family and friends-
Kimberly Steele
Friend
November 13, 2020
May your hearts soon be filled with wonderful memories of joyful times together as you celebrate a life well lived.
Etta Driskell
Friend
November 13, 2020
Showing 1 - 9 of 9 results