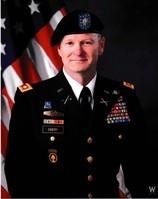 BORN
1967
DIED
2020
ABOUT
Peoria High School
FUNERAL HOME
Calvert Funeral Home Clinton Chapel
201 South Center Street
Clinton, IL
Norman E. Emery
PEORIA - Lieutenant Colonel (ret.) Norman Emery, United States Army, 52, of Clinton, IL, formerly of Peoria, passed away in his home, surrounded by family on Thursday, June 4, 2020, at 2:43 p.m., after a 3 ½ year battle with brain cancer.
A memorial service will be held on June 15, 2020, at 11 a.m. at First Christian Church in Clinton, IL, with Greg Taylor officiating. A graveside ceremony with military honors will be held immediately following at Oak Park Cemetery in Clinton, IL, with Allison Hitchings officiating. In light of Covid 19, specific measures will be taken for the protection of those in attendance. Calvert Funeral Home in Clinton, IL, is in charge of arrangements.
Born October 3, 1967, in San Diego, CA, the son of Gerald Emery and Linda Ely, he grew up in Peoria, IL, with Gerald and Patricia Emery, and his brother, Kevin Emery. He was active in sports and a variety of extracurricular activities. He maintained lifelong relationships with many of his classmates, especially those from Peoria High School.
Lt. Col. Emery graduated from Illinois State University in December of 1989 with a BA in Russian Studies. He was commissioned in May of 1989, completing the ISU ROTC program. He served in the Field Artillery, Military Intelligence and Information Operations (IO) branches with duty at Schweinfurt, Germany; Fort Campbell, KY; Zagreb, Croatia; Monterey, CA; Fort Bragg, NC; and Fort Belvoir, VA; and served 39 months in Iraq and Afghanistan. He earned an MS in Defense Analysis from Naval Postgraduate School, completing his joint thesis on "Terrorist Use of Information Operations." He was a decorated veteran of Operation Enduring Freedom and Operation Iraqi Freedom. His badges and awards include Airborne, Air Assault, Bronze Star, Defense Meritorious Service Medal, Iraq and Afghanistan Campaign Medals, and Military Outstanding Volunteer Service Medal.
In 2008, Norman was reunited with his high school sweetheart, Rachel, of Clinton, IL. They were married that same year and he became father to five children that he "loved as though he had been there from the beginning." He retired from the Army in 2009, and in 2012 their daughter, Naomi, was born. He was proud to become "Papa" to Adeline Grace in 2019.
In his retirement years, Norman explored a variety of interests and professions, including contracting as an information operations subject matter expert, landscaping, home inspection, substitute teaching and, finally, as a corrections officer for DeWitt County Sherriff. He was dedicated to investing in his community and did so by serving on the board of directors of the Dewitt County Habitat for Humanity and The Vault Youth Center. He was a member of the local chapter of Amvets and, after his diagnosis with glioblastoma brain cancer, he contributed to the organization of the local Brain Tumor Nature Walk and Fundraiser for the National Brain Tumor Society. He was an active member of First Christian Church in Clinton and loved playing the bass in the worship band.
While he took great pride in his in his service to his country during his 24 year military career, Norman placed an even higher value on the kind of man he was known to be in the context of his personal relationships and in service to others. Above all, Norman was a man devoted to living his Christian faith, to loving his family and his friends well, and to seizing opportunities to make a positive difference in the world around him.
Norman is survived by his wife, Rachel Emery of Clinton; his children, Hannah Emery of Clinton, Michaela Kitson (Devane Amalla) of Clinton, Jason (McKenna) Kitson of Knightville, IN, Sarah Emery of Chicago, IL, and Levi Kitson and Naomi Emery of Clinton, IL; and his grandchildren, Abdiel, Izra and Adeline Grace Amalla. He is also survived by his parents, Gerald and Patricia Emery of East Peoria, IL, and Linda Ely of Clinton, IL; as well as his brother, Kevin (JoAnn) Emery of Metamora, IL; and his sister, LaVahn Tate of Granite City, IL; and he loved being an uncle to their children.
The family would appreciate memorial contributions be made to one of the following: The Lieutenant Colonel Norman E. Emery Award and Scholarship Fund PPS Foundation, 5901 N. Prospect Road, Ste 14E, Peoria, IL 61614;
The National Brain Tumor Society Committed to finding a cure and improving the lives of all those affected by brain tumors, www.braintumor.org; and Inheritance of Hope, inspiring hope in young families facing the loss of a parent by providing life-changing retreats and resources, as well as ongoing spiritual, emotional, and financial support, www.InheritanceOfHope.org.
Online condolences may be made at www.calvertmemorial.com.
Published by Peoria Journal Star from Jun. 9 to Jun. 11, 2020.
To plant trees in memory, please visit the Sympathy Store.
MEMORIAL EVENTS
Jun
15
Memorial service
11:00a.m.
First Christian Church
Clinton, IL
Jun
15
Graveside service
Oak Park Cemetery
Clinton, IL
Funeral services provided by:
Calvert Funeral Home Clinton Chapel
MAKE A DONATION
MEMORIES & CONDOLENCES
Sponsored by Calvert Funeral Home Clinton Chapel.
3 Entries
To Rachel & Family,
Your husband and dad was a wonderful lifetime friend to my son. Reading your and Normans posts on Facebook told eloquent stories of love and hope reflecting determination to live life fully in the face of cancer. Cancer did NOT silence your courage, nor cripple your love, nor shatter your hope, nor corrode your faith. Memories of Norman as a boy playing with the kids and my son on Maplewood will remain in my heart. Gods Grace will carry you this valley to the mountain tops. Love Ron Funk
Ron Funk
Friend
June 14, 2020
Gary & Pat
Our deepest sympathy and priers!
Marie-Christine & Imre
Imre J Pinter
Friend
June 11, 2020
Gary & Pat,
I am saddened to see this news of Norman and you have my condolences. He was a true hero. I wish the best for his entire family.
Roark
Roark Williams
Friend
June 9, 2020
Showing 1 - 3 of 3 results