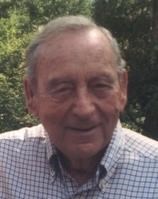 BORN
1921
DIED
2021
ABOUT
Farmington Central High SchoolPeoria High School
FUNERAL HOME
Davison-Fulton-Woolsey-Wilton Funeral Home
2408 West Willow Knolls Drive
Peoria, IL
William "Bill" Osborne
PEORIA - William "Bill" Osborne, 99, of Peoria, IL, formerly of Dunlap, IL, died on Tuesday, Jan. 26, 2021, at Liberty Village in Peoria, IL.
Bill was born on March 31, 1921, in Peoria Heights, IL, the son of Clarence and Lucille (Clark) Osborne.
Growing up during the Great Depression, he had a newspaper route for the Peoria Journal-Star for five years. He had recalled delivering papers to people living in tents and shacks, but had noted they always had their money when he came to collect. He couldn't say the same for some of the residents in nicer homes, whom he often had to chase down at all hours of the day to pay their bill.
A lover of baseball and the Chicago Cubs, he was an original member of the Peoria Heights Angels baseball team, playing shortstop and traveling throughout the Peoria area to play. Bill graduated from Peoria High School (formerly Central High School) in 1939.
He met his high-school sweetheart, Elsie Schaefer, while skating at Glen Oak Park. The two married on Sept. 19, 1943, at Glen Oak Christian Church in Peoria. Their honeymoon consisted of Elsie saying goodbye to Bill in St. Louis while he shipped off to serve in the U.S. Army (Air Corps) during World War II.
Based out of Attlebridge, England, he flew 32 missions in a B-24 Liberator bomber over Europe and served as a nose gunner. Following the war, he worked for Standard Oil/Amoco as a field engineer. He retired in 1979 after 35 years on the job.
Bill and Elsie took their family on camping trips and, in retirement, traveled the world, visiting every continent except for Antarctica. Bill was an avid gardener, who always had beautiful flowers and a bountiful garden each year. He also enjoyed hunting, be it for rabbits along the Illinois River or deer in Idaho, and fishing.
Bill is survived by his two sons, William "Billy" (Lucinda) Osborne Jr. of Salmon, ID, and Jay (Jayne) Osborne of Coal Valley; three granddaughters and a step-granddaughter, Heather (Josh) Loftus of The Woodlands, TX, Lindsay (Brian) Stauss of Scottsdale, AZ, Malinda (Will) Larkin of Elk Grove Village, IL, and Ashley Hartson of Chicago; and six great-grandchildren, Riley and Kalin Loftus, Joy and Kelsey Stauss and Ella and James Larkin. He was preceded in death by his parents; sister, Shirley Osborne; sister-in-law, Martha Humphrey; and a daughter-in-law, Susan Osborne.
Private graveside services to celebrate Bill's life will be held at a later date at Swan Lake Memory Gardens in Peoria.
Online condolences may be expressed at www.woolsey-wilton.com.

Published by Peoria Journal Star from Feb. 1 to Feb. 3, 2021.
To plant trees in memory, please visit the Sympathy Store.
MEMORIAL EVENTS
To offer your sympathy during this difficult time, you can now have memorial trees planted in a National Forest in memory of your loved one.
Funeral services provided by:
Davison-Fulton-Woolsey-Wilton Funeral Home
MAKE A DONATION
MEMORIES & CONDOLENCES
Sponsored by Davison-Fulton-Woolsey-Wilton Funeral Home.
1 Entry
I have very fond memories of Bill and Elsie from the last time we all went to the Cabin In Minnesota. Bill was my second cousin (my mom is Helen Rees McCoy).
Mary Reed
Family
February 2, 2021
Showing 1 - 1 of 1 results