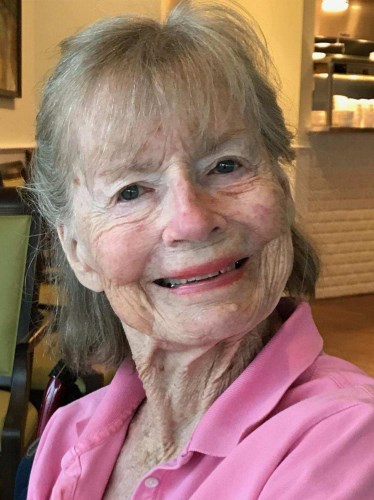 Her father a pharmacist, the family lived along Florida's Gulf Coast in the communities of Inverness, Venice, Clearwater, and Bradenton. As a benefit of owning a drugstore, the family kitchen had a real milkshake machine. Each night, chocolate malted shakes were the norm; Nancy enjoyed anything chocolate until her final weeks. In 1948, as a shy and quiet teenager with long, thick strawberry blond hair, Nancy started ballet and tap dance. A delightful, beautiful, and special gift was uncovered as Nancy began to express herself and shine publicly. Soon, she was performing at large recitals, the Florida State Fair in Tampa, and on television. At home in Bradenton, she began to teach ballet classes. Having a very gentle and kind disposition and being so very thoughtful of everyone, she was the perfect example and instructor for young girls who aspired to dance.

As a student at Bradenton's Manatee HS, Nancy met classmate Jim Mongoven; they began dating in their Senior year. After graduation, Nancy went to Sullins College (VA) to study dance while Jim enrolled at UF. Smitten, their relationship matured and in 1955, at age 19, they married. Jim enlisted in the Army, went overseas, and found his calling in dentistry. Nancy remained home, worked at a local bank, and bought their first car. Returning stateside, Jim was assigned to the 101st Airborne at Fort Campbell; their first home was in Hopkinsville, KY, a short drive from the base. Post army-life, Nancy and Jim moved to Gainesville, Fla., where Jim finished his bachelor's degree. Welcoming their first child, Lisa, in August 1957, they soon moved to New Orleans and Loyola University's dental school. In 1959, Mike was born; Stephanie followed in 1960. Upon graduation, the young family moved to Kissimmee, Fla., to establish Jim's first dental practice; 1963 saw the birth of Maria. Relocating to Port Charlotte in 1965, a thriving dental practice began. Luke, born in 1970, completed the family.

Like many women of her generation, Nancy chose to work in the home and manage and support her family's growth. She thrived in these domestic roles, and the family flourished because of her commitment and sacrifice which became hallmarks of all facets of her adult life. An amazing giver and nurturer, she was on the Parish Council for St. Charles Borromeo Catholic Church which kept her very in tune with her children's Catholic school activities. Also, a Eucharistic minister for St. Charles, she supported administering the Holy Sacraments to church members who were sick, hospitalized, or otherwise confined to their homes. Other community activities included Nancy's volunteering at Habitat for Humanity, her providing leadership as a Cub Scout Den Leader, and her work with the local pregnancy hotline where Nancy listened to and counseled teen girls and adult women who were in difficult personal circumstances. In the 1980s, Jim and Nancy established an incredibly successful AMWAY business and Nancy was the Chief Administrative and Financial Officer, managing all aspects of the business. In 1985, Jim and Nancy became grandparents to the first of 18 grandchildren! That same year, Nancy was diagnosed with Parkinson's Disease which slowly stole her away from her loved ones.

Retiring in the late 1990s, Jim and Nancy moved to Dillsboro, N.C. They built their dream home in the Appalachian Mountains, often and affectionately referred to as The Barn on the Middle Ridge. There were many reunions, holidays, anniversaries, birthdays, and get-a-ways celebrated on the Middle Ridge until Jim's death in 2013. Since 2011 and until her passing, Nancy resided at a highly skilled nursing facility in Fort Myers, Fla.

Nancy is survived by her sister Janice (Jack) Woodall from Lexington, Va., and all her adult children: Lisa (Keith) Goodwin of Wilmington, Del.; Mike (Camme) Mongoven in Ft. Myers; Stephanie (John) Ottavi of Dubuque, Iowa; Maria Rowe (Woodstock, Ga.); and Luke (Claire) Mongoven (Carrboro, N.C.). Nancy's 18 grandchildren and one great-grandson range in age from 3 months to 36 years and reside up and down the US Eastern seaboard, the South, the Midwest and Texas.

Tentative plans are being made to reunite Nancy with Jim in a family celebration of Nancy's life in North Carolina next spring.
Published by Sun Newspapers from Nov. 28 to Nov. 24, 2021.
To plant trees in memory, please visit the Sympathy Store.
MEMORIAL EVENTS
To offer your sympathy during this difficult time, you can now have memorial trees planted in a National Forest in memory of your loved one.
MAKE A DONATION
MEMORIES & CONDOLENCES
1 Entry
Our sincere condolences to family and friends of our Manatee County High School Class of 1953 Alumna. Manatee High School Alumni Association Bradenton, Florida
Manatee High Alumni Association
December 7, 2021
Showing 1 - 1 of 1 results