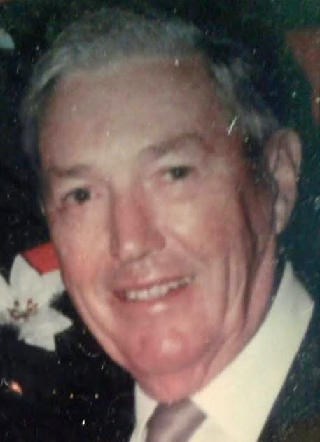 He was born on Nov. 19, 1920 in Perrineville, New Jersey to Clara Scanlon Cahill and William Cornelius Cahill."Pete" served in the U.S. Navy during World War ll, earning a Purple Heart when his ship, the USS Quincy, was torpedoed and sank with few survivors. He was a member of the Elks, the Veterans of Foreign Wars, the Knights of Columbus and Saint Francis of Assisi Catholic Church, Grove City, Florida. In his day, he was an avid tennis player and a much loved amateur comedian. He was also an accomplished woodworker.Pete will be greatly missed by his wife of 67 years, Margaret Mary: his son, William Dennis; and daughters, Nancy (Christopher) Wood, Carol (Michael) McKenna, and Joan (Vincent) Spallone. Also his daughter-in-law, Catherine Wilder Cahill; his grandchildren, Billy, Bobby and Angela Cahill, Matthew Peters, Kyle Cahill; and many nieces and nephews. He was preceded in death by his parents; his brother, Robert Cahill; his sister, Betty Barham; and his son, Robert Cahill.He was beloved by all who knew him.

A memorial Mass will be held in the future.

Arrangements entrusted to Your Traditions Cremation and Funeral Chapel, Sarasota.
Published by Sun Newspapers on Nov. 5, 2017.
To plant trees in memory, please visit the Sympathy Store.
MEMORIAL EVENTS
To offer your sympathy during this difficult time, you can now have memorial trees planted in a National Forest in memory of your loved one.
Funeral services provided by:
Your Traditions Cremation and Funeral Chapel
MAKE A DONATION
MEMORIES & CONDOLENCES
Sponsored by Your Traditions Cremation and Funeral Chapel.
5 Entries
He was a lovely father, husband and friend. I will miss him forever
July 21, 2018
So Sorry to hear about Uncle Billy. We were blessed to have seen him last year Prayers and thoughts in your time of sorrow
November 7, 2017
May our loving heavenly Father comfort your family during this time of grief. He see's the pain death causes so he promises to end it forever very soon.(Isaiah25:8)
November 5, 2017
My condolences to the family. May God's Word and loyal love comfort you at this time. ~Psalms 136:23
November 3, 2017
I'm sorry for your loss. May the words of ~John 6:28,29 be of much comfort during this difficult time.
November 3, 2017
Showing 1 - 5 of 5 results