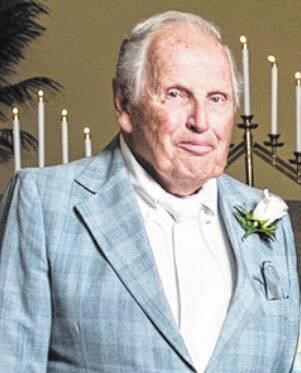 LUCASVILLE-Eugene Franklin Marsh was born on May 15, 1928, in Portsmouth, OH, the son of the late Merrill G. Marsh and Mildred K. Hastings Marsh.

He was a 1946 graduate of Portsmouth High School. He served in the US Navy from 1946-1948, during World War II. He then attended Centre College from 1948-1951, at which time he was called back to active duty in the U.S. Navy Reserves from 1951-1952, during the Korean War. He is a retired employee of Martin Marietta in Piketon, OH, for whom he was employed from 1953-1992 with over 39 years of service and after retirement, he later worked as a consultant from 1994-1997 for contractors for the upgrade of OP Procedures at the Martin Marietta Plant.

He was a member of the American Legion Post 23, the Aurora Masonic Lodge #48 of Portsmouth, and El Hasa Shriners International. He was also a member of the Goodyear Atomic Retirees Club, of which her served as coordinator of the retiree meetings for over 10 years. He was an avid antique car enthusiast and loved to drive his 1968 Buick Skylark convertible. He also enjoyed researching his family genealogy, coin collecting, was a model train buff, and enjoyed attending model train and railroad exhibits.

Funeral services will be conducted at noon Friday, November 19, 2021, at the McKinley Funeral Home in Lucasville with Bob Davis officiating. Entombment will follow in Memorial Burial Park where military rites will be performed by the William Baker and James F. Irwin Posts of the American Legion. Friends may call 6 to 8 p.m. Thursday and an hour prior to the funeral Friday at the funeral home.

Published by The Daily Times from Nov. 17 to Nov. 18, 2021.
To plant trees in memory, please visit the Sympathy Store.
MEMORIAL EVENTS
Nov
18
Calling hours
6:00p.m. - 8:00p.m.
McKinley Funeral Home
10562 U.S. Route 23 N, Lucasville, OH
Nov
19
Calling hours
11:00a.m.
McKinley Funeral Home
10562 U.S. Route 23 N, Lucasville, OH
Nov
19
Funeral service
12:00p.m.
McKinley Funeral Home
10562 U.S. Route 23 N, Lucasville, OH
Funeral services provided by:
McKinley Funeral Home
MAKE A DONATION
MEMORIES & CONDOLENCES
7 Entries
Tammy, my condolences to you and your family.
Janet Hieneman
Work
November 20, 2021
Bob, I want you to know that I am thinking of you and your family. You have been a strong son and a testament to your family's strength. Stride on, buddy.
Steven L Mowery
Family
November 19, 2021
Sorry to hear the news. I told my mom, she was sad to hear it. We didn't know about your mom either. You all are in our prayers. Hope you all are well.
Keith Ratliff
Friend
November 18, 2021
Tammy & Family. My deepest sympathies go out to you and your family on the loss of your Father/Grandfather. May God give you the peace that you seek at this difficult time. And may the love of those around you provide comfort and peace to get you through the days ahead.
Barb Hobart
November 18, 2021
So sorry Bob!!! Love you!
Karen
Friend
November 18, 2021
Dear Tammy and Family, I am so deeply sorry for the loss of your Dad and Grandpa. You are in my thoughts. I am truly sorry for your loss. Sincerely. Mark Goffinet
Mark Goffinet
November 18, 2021
Gene was always a very positive manager who I got to know and work with during our tenure at the Portsmouth Gaseous Diffusion Plant. Rest in Peace Gene. My condolences to Tammy and the family.
Cynthia Quillen
November 17, 2021
Showing 1 - 7 of 7 results