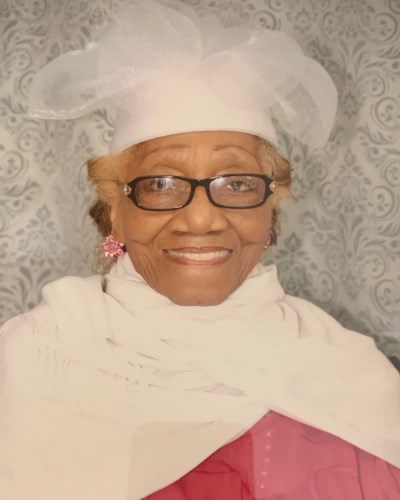 BORN
1917
DIED
2019
Betty Blanchard born August 15, 1917, passed away at 102 years old on December 16, 2019, in her daughter's home in Frisco, TX. She was a native of Lamar, MS, however, spent most of her early years in Memphis, TN where she worked at the historic Peabody Hotel. Betty later called Gary, IN home where she raised five children Thelma, Robert, Carol, Daisy, and Tyrone with late husband Charles Gillum. Her husband Charles and children Thelma, Robert and Tyrone preceded her in death. Betty was a pillar in the community in Gary, IN and later in Plano, Tx. While in Gary, she was active in assisting teen moms, a Servant Leader representing New Moriah Baptist Church at the National Baptist Convention and speaking at various churches as well as singing in the choir. At Old Moriah Baptist Church Betty sang in the choir and became the choir director. She played a pivotal role in the election of Mayor Hatcher before and active supporting him during his term in office. In1985 she moved to Phoenix Arizona to be with her daughter Carol and was active in the church choirs and politics where she campaigned for Jesses Jackson. In 1990 made Texas her home where she continued involvement in politics as a precinct councilwoman. When she joined the body of Christ at First Baptist Church of Hamilton Park, she loved to sing and continued as a member of the Sanctuary Choir. She began a breakfast program that proceeds helped the church. She was active in missions and served as an officer in many organizations over her lifetime. When she passed, she was a member of Friendship Baptist Church in the Colony Texas, where she was a member of the Women Mission, Mature Ministry and sang in the choir as well. She was a member of the Plano Senior Center and Frisco Senior Center she was 2nd runner up in the senior pageant in Plano and a Frisco helper implementing a Red Hatters Group for senior citizens. Betty is survived by two daughters Carol Malone (Rev Charles Malone) and Daisy (Ronnie Malone), seven grandchildren Marlen, Monte, Rassan, Ira, Tatiana, El Salvador and Robert Jr. Eleven great-grandchildren Dimitri, Kassee, Sasha, Malachi, Makaya, Isaiah, Michael, Joshua, Josiah, Bobby and Ezekiel and a host of great-great-grandchildren. Graveside services Saturday, December 28, 2019 at 11:00am at Fern Oaks Cemetery, Griffith, IN

Published by Post-Tribune on Dec. 25, 2019.
To plant trees in memory, please visit the Sympathy Store.
MEMORIAL EVENTS
Dec
28
Graveside service
11:00a.m.
Fern Oaks Cemetery
Griffith, IN
MAKE A DONATION
MEMORIES & CONDOLENCES
4 Entries
El Salvador Edwards
Grandchild
December 28, 2019
Granny you can now rest in the hands of our Lord Jesus CHRIST and hear him say Well done thy Faithful Servant. We all Love you and will miss you.
Love Marlen...
December 28, 2019
My loving grandmother I will see you in heaven. I am still holding the reins and never letting go. Love always Monte Hurt
December 28, 2019
I remember Mrs. Blanchard from the 1960's and very early '70's singing with my mother and the other women in the Senior Choir at New Mt. Moriah in Gary. They wore purple choir robes and sang those good old church hymns. We stopped by Mrs. Blanchard's house often in Marshalltown to give her a ride to church and my Mom always enjoyed her company. My condolences to the family.
December 28, 2019
Showing 1 - 4 of 4 results