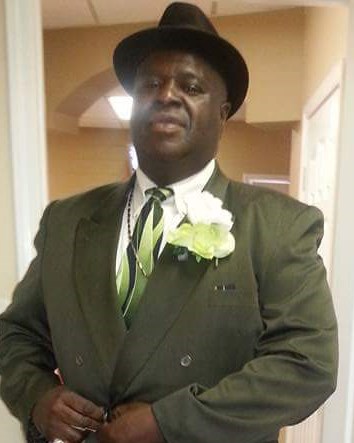 BORN
1958
DIED
2017
FUNERAL HOME
Guy & Allen Funeral Directors, Inc.
2959 West 11th Avenue
Gary, IN
Brian was born July 7, 1958, to Ethel M. Terry and John L. Terry in Gary Indiana. Brian was baptized at St. Monica Church and took own the name Brian Everett Francis Terry. He attended West Side High School and enjoyed being a Cougar. Brian was a former employee of Methodist Hospital in Gary and worked numerous jobs, however his true love was feeding the homeless and praying with them. Brian enjoyed family, people and cooking. He was truly a Mama's Boy, because when he saw her, his eyes would light up and so would hers. Brian is preceded in death by Brother John L. Terry Jr; Father John L. Terry Sr.; Grandmother Mattie Allen; Grandfather Milton Allen; Sisters Maureen Terry, Sharyl Terry, and Shonna Samuels. Brian is survived by loving wife Etta Terry; Mother Ethel Terry; Sister Kathy Kelly; nephew Devin Williams Sr. and two great nephews and a host of relatives and friends. Visitation Tuesday June 13, 2017 from 9-11a.m. Family hour 10-11:00 a.m. with funeral services to follow at 11:00a.m. all services at the Guy & Allen Chapel. Interment Evergreen Cemetery.

To plant trees in memory, please visit our Sympathy Store.
Published by Post-Tribune on Jun. 11, 2017.
MEMORIAL EVENTS
Jun
13
Visitation
9:00a.m. - 11:00a.m.
Guy & Allen Funeral Directors, Inc.
2959 West 11th Avenue, Gary, IN
Jun
13
Funeral service
11:00a.m.
Guy & Allen Funeral Directors, Inc.
2959 West 11th Avenue, Gary, IN
Funeral services provided by:
Guy & Allen Funeral Directors, Inc.
MAKE A DONATION
MEMORIES & CONDOLENCES
7 Entries
Mr. Brian Terry brother you are truly missed had great memories from back in the day at Tolleston WSH a brother always had something going on for the cause !
Rest Easy my friend !
Orvin Ware
Friend
June 6, 2020
Brian you will be missed.
June 20, 2017
My deepest sympathies for your loss, May the God of all comfort bring your family peace . Romans 12:12
June 16, 2017
Mrs Terry and family, I am praying for you and the family , only God knows the answer as to why, know that God loves you, and is always with you in your deepest sorrow,
Rosie Lewis
June 12, 2017
I will miss you dearly my friend. You have always been a rock for me. So thankful for the good times that I shared with you over the many years and the good times shared with you and Etta. Rest-In-Peace B until we meet again in the Kingdom of Heaven. My prayers and sincere condolences to Etta, your Mom and all of your family. God's blessings to them all. Much Love ❤
Daria Jackson
June 11, 2017
Brian was a friend of mine from way back to Tolleston day,we drank together we laughed together we were friends from the first time we met..Brian will always have a place in my heart,gone to soon.. praying for the Terry family, my deepest condolences.
Cynthia Liggins
June 11, 2017
To the Terry family thank you for sharing Brian with us, back a Tolleston Jr. High I consistently heard a name over and over which was Brian Terry, a Man that stood out above & beyond. He was always inquisitive, strong willed, and friendly, and touched many lives God definitely predestined his journey !
RIH MOG !
Orvin Ware
June 11, 2017
Showing 1 - 7 of 7 results