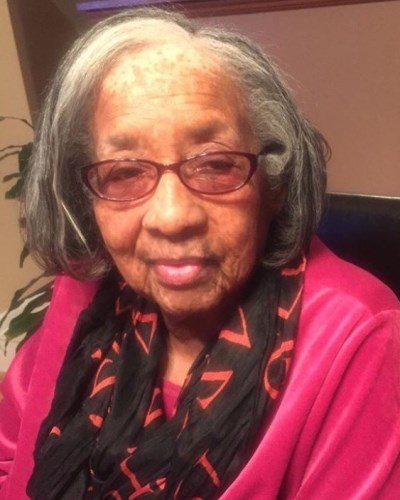 Imogene was born in the city she devoted a lifetime of love to Gary, Indiana, on November 20, 1931, the child of Lohney L. and Geneva Scott McDaniel. She graduated from Gary Roosevelt High School and briefly attended Hampton Institute (University) in Hampton, Virginia. Imogene continued on to receive a Bachelor of Science degree from Indiana University, in Bloomington, Indiana. Imogene joined in nuptial bliss with her soulmate James Templeton (J.T.) Harris, Jr. on September 1, 1951. Their blessed union lasted 51-years until J.T.'s transition to glory in 2001. Imogene taught in the Gary Public School System for many years, first, at Froebel School, followed by Norton Elementary School as a third-grade teacher, and then she served as Head Librarian at Lincoln Elementary School. Imogene's calling in life was partnering with J.T. to run the family businesses - Harris Printing Company (established in the 1950s) and Gary INFO Newspaper (founded in 1963). They diligently produced a publication that became the voice of African Americans throughout Northwest Indiana for more than four decades. Imogene was a compassionate mentor, sage, and friend to people of all ages. Harris Printing Company and Gary INFO generated opportunities that contributed to the growth of existing Black businesses as well as the aspirations of budding entrepreneurs, writers, photographers, and printers. From newspaper boys and girls trying to earn pocket change, to eventual affluent and successful individuals around the nation, "The Shop," as Info's midtown location was affectionately known, was more than a place for workers to hone their craft, it was a launching pad for life. A lifelong resident of Gary, Imogene was a member of Delaney Memorial United Methodist Church which is now Christ Memorial Methodist Church. Memberships included the Gary branch NAACP, the Gary Urban League Guild, Delta Sigma Theta Sorority, Inc. Betu Nu Chapter (1962). Imogene was among the founding members of the National Newspaper Publishers Association (NNPA) and also a founding member of the Lake County Association of Black Communicators. Her many lifetime accolades included the Drum Major Award presented to her and J.T. by the Gary Frontiers Service Club, for their commitment to eliminate inequality, prejudice, and racism. They also proudly received a Congressional Record from the Hon. Indiana State Representative Peter J. Visclosky in 1994 for their commitment to instill equality and justice throughout the City of Gary. Imogene will be fondly remembered by all for her dedication to excellence, her deep compassion, unswerving principles, thoughtful leadership, devotion to family and community, and loyal friendship. Imogene is survived by two loving and devoted daughters Temple-Jene Harris Fleming (Joseph) and Gaylyn Harris. The pride of her heart, her five grandchildren, Lavon Robin Fleming, Lateefah Shariene Fleming, Joseph Harris Fleming, and Terilyn Marshelle Fleming; great-grandson Nathaniel Joseph Williams; sister-in-law Emma Harris (Lorenzo), godchildren Calvin, Daresia and Cheryl Pruitt, committed goddaughter Djuana Anderson, and a host of nieces, nephews, and friends. Imogene is preceded in death by her parents and her sister Levevian McDaniel Benton (Norman). The family will hold a Memorial Service to remember the life of Imogene at a future date where her transition will truly be celebrated. Arrangements are being handled by Guy & Allen Funeral Home.

To plant trees in memory, please visit our Sympathy Store.
Published by Post-Tribune on Jul. 26, 2020.
MEMORIAL EVENTS
No memorial events are currently scheduled.
To offer your sympathy during this difficult time, you can now have memorial trees planted in a National Forest in memory of your loved one.
MAKE A DONATION
MEMORIES & CONDOLENCES
7 Entries
In loving memory of a wonderful person. We will love you and miss you always.
Anonymous
Acquaintance
August 1, 2020
Temple-Jene and Gaylyn sorry to learn of your mom’s passing. She was a great woman who I admired. Praying for your strength and peace at this difficult time...
Bill Jordan
Friend
August 1, 2020
Mrs. Harris was a spark in my life that steered me toward writing and photograph before I even knew I was interested in either. I remember eagerly waiting for every addition on Info newspaper and cherishing every article in it with delight before I knew that my third-grade teacher made it possible. She made the transition from Norton to Lincoln much easier for me just by being there to talk to. There is so much I could say about such a lady, but I will end here merely by saying, "...we shall not look upon her like again!" Rest In Peace...
Ulysses Foreman
Student
July 29, 2020
To my dear soror and line sister Gaylyn. May the Lord continue to smile upon you and grant your His peace. You were a wondferful daughter and you are in my thoughts and prayers.
Mary Brown
Friend
July 28, 2020
Gaylyn sweet heart I am so very very sorry to read about the passing of your Dear sweet loving kind Mother but I say my heart and prayers are with you keep the faith for God will see you through much love to you
Sis.Doris Blair
July 27, 2020
To Gaylyn and Family,
May The God Of All Comfort be with you.
Rev. Duane & Bernice Grant
July 26, 2020
May God bless you and your family in this time of sorrow.
ron christopher
July 26, 2020
Showing 1 - 7 of 7 results