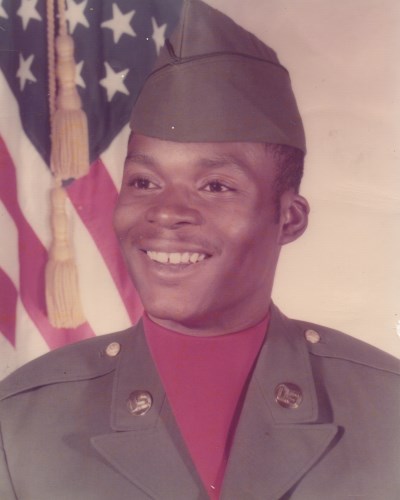 FUNERAL HOME
Guy & Allen Funeral Directors, Inc.
2959 West 11th Avenue
Gary, IN
Kevin George Johnson Age 62 of Gary, IN departed this life on Friday October 13, 2017. He attended and graduated from West Side High School in 1973 where he excelled in both sports and in the field of drafting which later landed him employment at Gary's Sanitation Department. Kevin had also served in the US Army. Kevin is preceded in death by his mother Priscilla Ann Johnson. His memories will be cherished by his father Thomas Johnson; brothers Dr. Quentin (Nettie) Johnson, Derrick T. Johnson and Anthony (Brenda) Johnson. Kevin's sisters include Tina Cheairs, Mitzi Johnson, and Patsy (Kirk) Johnson along with a host of relatives and friends. Visitation Monday, October 23, 2017 from 9-10:00 a.m. with funeral service immediately following at 10:00 a.m. all services at the Guy & Allen Chapel 2959 W. 11th Ave. Interment Oak Hill Cemetery.

Published by Post-Tribune on Oct. 22, 2017.
To plant trees in memory, please visit the Sympathy Store.
MEMORIAL EVENTS
Oct
23
Visitation
9:00a.m. - 10:00a.m.
Guy & Allen Funeral Directors, Inc.
2959 West 11th Avenue, Gary, IN
Oct
23
Funeral service
10:00a.m.
Guy & Allen Funeral Directors, Inc.
2959 West 11th Avenue, Gary, IN
Funeral services provided by:
Guy & Allen Funeral Directors, Inc.
MAKE A DONATION
MEMORIES & CONDOLENCES
10 Entries
Hey Kevin, remember the Sunday we all had sung in the choir and you were tire?
Derrick (Brotha)
October 16, 2020
So sorry for your loss .May the God of comfort be with the family and friends. Romans 12:12
October 24, 2017
My condolences to the Johnson Family. Kevin was my former brother-n-law. Always had a smile for me. ALWAYS called me "Sis", despite a divorce many many years ago.......But this never ever defined the loving relationship this beautiful family had for each other. Rest in Peace Kevin. May God grant you an eternal life in his Glorious Kingdom.
Thoughts and prayers be with all as they mourn a life that was taken way too soon.
Love,
Your Sister-n-Law,
Patricia Dickens Johnson
Patricia Dickens-Johnson
Family
October 23, 2017
To the Johnson family so sorry to read of the passing of Kevin. Remember him and the rest of you when I came to your mom for sewing. Sorry I just read about it today, otherwise I definitely would have been to the service. You all are in my prayers. God Bless.
Sylvia Smith
October 23, 2017
To Tommie Johnson and Family,

To Quentin and the Family,
My prayers and thoughts are with you. May God grant you comfort and strength .

Classmate 1973 WSH
Cathy Russell
October 22, 2017
Mr. Johnson will always be considered a HERO for serving our country. Thank you Sir and May God hold you in his loving arms. Rest in Peace.
Laura Christy
October 22, 2017
To my classmate Quentin Johnson and the Johnson Family,
May God comfort you as only He can...You are in my prayers.
Sharon Wynn Ishman
October 22, 2017
Kevin was an intelligent caring and compassionate man who always kept it real,you will be missed.
Armentha Hackett
October 22, 2017
Kevin, not just because you were my brotha' but you were GOOD on the court as well as in drafting. "Choice" is a word that many of us cannot truly define until a specific moment/s are presented to us which are "the defining moments in our lives. You are always my brotha' and don't forget the 23rd Psalm (Lol!)! I Love You My Brotha',
Your Brotha' Forever,
Derrick
PS: Never forget the "Chicken George!" (Lol)
October 21, 2017
Showing 1 - 10 of 10 results