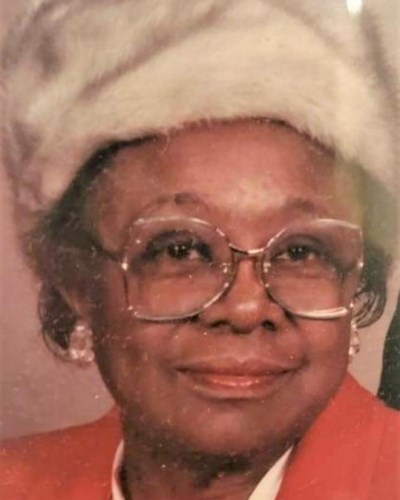 BORN
1928
DIED
2020
FUNERAL HOME
Guy & Allen Funeral Directors, Inc.
2959 West 11th Avenue
Gary, IN
Ruby Lee Todd was born May 28, 1928 in Alligator, MS. She was the eldest of two children to the union of Rebecca Brooks and John Smith. Moving with her mother she grew up in Little Rock, AR. Embracing her faith in God, Ruby was baptized at the age of 12. At the age of 16, she began a new journey in her life when she took a train to Chicago, IL, where she lived with her uncle for two years. In 1946 Ruby relocated to Gary, IN where she met her husband Jackson Todd. She began her first job at Hotel Gary where she broke barriers by becoming the first black cook for the hotel. She later went on to become a cook at Methodist Hospital and helped to organize the first cooks' union in the city of Gary. Ruby Lee was also a lifetime member of the NAACP. She was a member of Mamie J. Russel Order of the Eastern Star and later became a member of Lily of the Valley #41. Ruby Lee was a member of Pilgrim Missionary Baptist Church which she attended faithfully until her health failed. Ruby loved traveling, fishing, and family, but most of all she loved God. Preceding her in death were Rebecca Brooks (mother), Jackson Todd (husband), Emma Todd (daughter), Andrew Todd (son), Willie Mae Walls (sister), Willie Walls (brother- in- law), Thomas Ford Sr. (son-in-law), Orchalle Harris (cousin), and Rev. Lessie Green (niece). She leaves behind to cherish her memory Sallie Todd (daughter), Patricia Ford (daughter), Special Nephews Lorenzo Green Sr. Walter Green, Charles (Sharon) Walls, Glen (Sheila) Walls, daughter- in- law Rose Mumford, 7 grandchildren,16 great grandchildren and 4 great great- grandchildren and host of other nieces, nephews, and friends. Visitation Tuesday, August 25, 2020 from 9 to 11am family hour 10-11am, funeral services will follow at 11:00am all at the Guy & Allen Chapel, 2959 W. 11th Ave. Interment Evergreen Cemetery.

To plant trees in memory, please visit our Sympathy Store.
Published by Post-Tribune on Aug. 23, 2020.
MEMORIAL EVENTS
Aug
25
Visitation
9:00a.m. - 11:00a.m.
Guy & Allen Funeral Directors, Inc.
2959 West 11th Avenue, Gary, IN
Aug
25
Calling hours
10:00a.m. - 11:00a.m.
Guy & Allen Funeral Directors, Inc.
2959 West 11th Avenue, Gary, IN
Aug
25
Funeral service
11:00a.m.
Guy & Allen Funeral Directors, Inc.
2959 West 11th Avenue, Gary, IN
Funeral services provided by:
Guy & Allen Funeral Directors, Inc.
MAKE A DONATION
MEMORIES & CONDOLENCES
13 Entries
Mrs. Todd was a wonderful & caring person. I had the pleasure of being her nurse years ago at Northlake Methodist Hospital. She was a really sweet person, and she loved God with all her heart, and she was God-fearing. I was sad to hear of her homegoing, but knowing that we'll see each other soon is a joyful anticipation. So, to my nephews, Michael and Andrew, and the rest of the family, I love you and I'm praying for your comfort.
joann prude
Family
August 27, 2020
I am sorry to hear about the passing of Ms Ruby , please accept my prayers and condolences. This is never a easy thing to go through, but through hard times lean on each other for support. My prayers are with the family at this time.
Earnest Tyler
Friend
August 27, 2020
The Best COOK EVER
Gloria Owens
Coworker
August 25, 2020
We will truely miss you
Frankie Ferrell
Friend
August 25, 2020
Sallie, Pat and Family, my sincere love, thoughts and prayers are with you all at this difficult time. I was sorry to learn that Mrs. Ruby had gone on to be with the Lord. I have very fond childhood memories of Massachusetts Street which definitely included Mrs. Ruby and the Todd Family. May God’s Grace and Mercy carry you through.
Arnetha Faulkner-Crittenden
Friend
August 25, 2020
My condolences to Pat Ford and the family. My heart goes out to you and the rest of your family. I didn’t know your mother but I am sure she was a very special lady. And loved by all. R.I.H Mrs Todd.
Michelle Ford
Friend
August 25, 2020
In loving memory of a wonderful person. We will love you and miss you always. We work many years together at Methodist.
Douglas Havens
Coworker
August 25, 2020
Brenda, Sally, Donnie, Keith (to all family members) on behalf of the Bradley family members please know you are in our thoughts and prayers.
Dorothy Bradley & Family
Family
August 24, 2020
May your hearts soon be filled with wonderful memories of joyful times together as you celebrate a life well lived.
Jennifer Ward
Friend
August 24, 2020
Dear Sallie Todd
We send our Condolences to you and your family during this time. Praying that God give you the strength and the understanding you need during this time. Grief can be so hard, but our special memories help us cope. Remembering you and your loved one today and always.
The Davis Family
Friend
August 24, 2020
Miss Todd was a very special and wonderful person. She will be truly missed. Love you and R.I.H My God Angle. My prayers are with the family and friends.
Kimveli Ratliff
Family
August 24, 2020
Such a lovely and loving lady! Praying for Sallie and family.
V. Parker PMBC
Vern
Acquaintance
August 23, 2020
To the family. She had such a sweet spirit.
Mary Major
Friend
August 22, 2020
Showing 1 - 13 of 13 results